Nicolas Caesar is a self-taught artist hailing from Northern CA. Founder of the Scary Art Collective, his artwork brings forth a whimsical creepy landscape populated by beings both sinister and sardonic. You will see glimpses of Sideshow madness within his paintings mixed with a healthy dose of 50’s B-Movie charm. The raw feel of his work twists the familiar yet remains strikingly original. Nicolas’ horrific characters with their permanent, toothy grins reveal a playful quality to his art that challenges you to keep from smiling along no matter what atrocity they are currently plotting for your future.

Nicolas Caesar’s work is in private collections in France, the Netherlands, Kenya, Japan, the United Kingdom, South Africa, Canada, and throughout the United States. Nicolas’ web comic Mosquito and Spider was accepted into the Cartoon Art Museum in San Francisco. He and his works have been features on Late Night with Conan O’Brien, KVIE PBS Sacramento, Sacramento’s Livewire, The Bay Area’s KOFY Tv20 – Creepy KOFY Movie Time, and Cleveland’s The Ghoul show.

Nicolas Caesar was the curator and one of the artists for Scream 4. His webcomic Mosquito and Spider was a selection for the Cartoon Art Museum in San Francisco. His work is collected internationally.

What were you like as a child? Did you always have a fascination for the weirder side of things?

I used to be obsessed with insects, dinosaurs and monsters. I had asthma so I spent most of my time indoors going through picture books and reading comics. I think monsters always fascinated me because they were my initiation to mutating, mixing and matching, and thinking outside the box. I think I was always weird.

I drew these stick figurish dinosaurs, I was always building worlds and scenes, it was my escape. As I got older I tried drawing Garfield, Dungeons and Dragons monsters, robots from The Black Hole. I knew I was terrible but it didn’t stop me, I loved drawing.

What do you think it is exactly about 50’s B-Movies that make them so timeless in their appeal?

I grew up watching a show called Creature Features with Bob Wilkins. I was always excited by monsters I had never seen before – every Friday and Saturday it was Godzilla, Mushroom People, Crab Monsters or the deadly worms in Squirm. I think it’s tied to the unknown, knowing that there could be thousands of creatures out there undiscovered. On top of that it taught philosophy. Whenever they’d defeat whatever giant monster of the week – they questioned humanity’s role in the universe and with nature. Most scripts were written by beatniks so you had giant puppet monsters mixed with parables. Now, I think MST3K reinvented the party movie, they’re fun to rip on for their outdated slang or bad dialogue – but as a kid they were early models to adulthood and bravery. 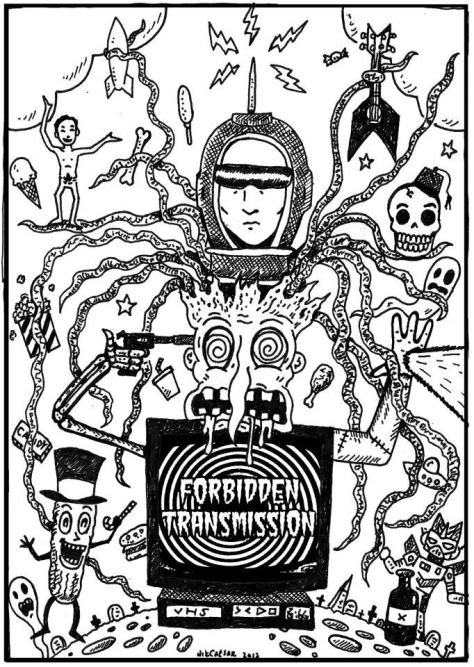 Who were some of your biggest influences?

What have you found to be the most difficult thing to learn as a self taught artist?

The business side of art, when I first started it was trial and error. Art, how it’s perceived, is always out of your control but selling it takes a lot of experimentation. You’re always working to tip the supply and demand scale closer to demand and a lot of that is breaking your own rules and exploring alternate avenues. The best way I can describe is is like playing several hands of poker and learning from your losses and wins, at the same time always making sure there’s gas in the tank.

What advice would you offer others looking to do the same?

Art is an uphill battle, don’t beat yourself up because you’re not where you imagined you’d be. Success and failures are irrelevant. The journey is the destination. You’re selling yourself and your art is your journal. If people want to be rich they should flip houses, art isn’t an animal of the square world, its pulled out of imagination and experimentation. Never give your power to jealousy, envy, or delusions of fame and fortune – just do your thing and keep doing it. The quickest road to ruin is trying to please everyone. Your success in a nutshell is being able to flawlessly execute your imagination to materials. Also don’t be a jerk.

How does it feel to have your works collected worldwide?

In the beginning it felt like the game of Risk, I wanted my work in every country, every city, now that I’ve matured I can really appreciate how the internet leveled the playing field when it comes to art.

Do you think you will pursue more work in the comic field in the future?

Of course, I’m the girl who can’t say no, if there’s an invitation I’m there!

What feelings do you hope to convey with your works?

To not take life or the art world so seriously, to ground yourself and have fun. My art in a sense is punk rock balancing out the serious 17 page artist statements. I used to hate when people called my work “Fun”, it always sounded so condescending but now I see its importance. It is the plaid to balance out the grey.

Do you think nostalgia plays a heavy role in your creations?

Definitely. They say write about what you know and I paint my brain. I make my art out of the things I loved as a kid, part of it’s nostalgia and other parts are able to express emotions in a cute comical way. 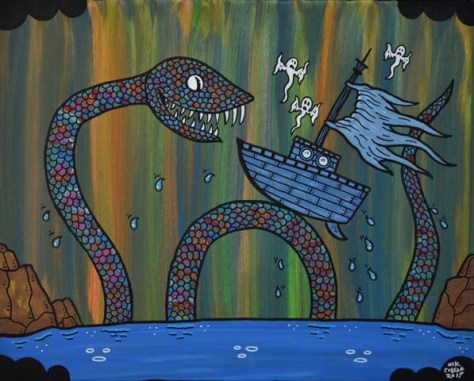 Are there any future projects you are looking forward to?

I’m producing a TV show called Mosquito and Spider based off of my web comic, I have a Troma movie themed art show coming up at Hyaena Gallery and my friend Jeremy Cross and I just launched our 99cent themed art show up on eBay.

I think for all artists it’s important to make work they’re proud of before you start listening to any armchair art critic. Even the most successful artists wrestle with their confidence. Be happy with what you do and those who support you, Never waste your time on educating people who don’t get it. Embrace you’re from outer space in their eyes. (smiles)