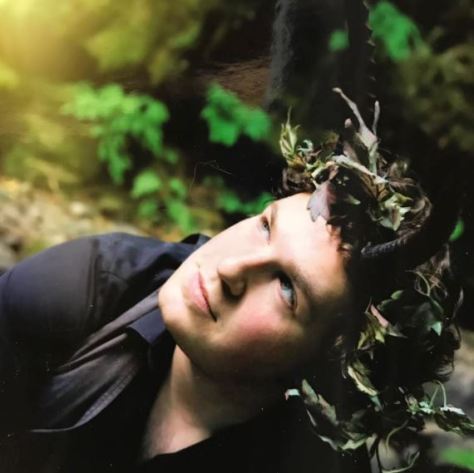 Toby Froud is best known for his appearance in the film Labyrinth (1986) and as writer/production designer of short film Lessons Learned (2014). His work as a creature designer and sculptor has been featured in such films as I Am Not a Serial Killer, Paranorman, The Boxtrolls, Kubo and the Two Strings, and Missing Link. He also worked as executive producer on Yamasong: March of the Hollows.

You have said you grew up in Magic. Can you tell us a little more about what that was like? What are some of your most fond memories growing up?

I’ve been lucky to grow up the way I have, in a place that is engrained with magic and steeped in history. I will be eternally grateful for the way my parents raised me. For teaching me to be true to yourself and the things you strive to create.

Do you think with the world being as it is today that magic is needed more than ever?

It feels like the world is in a darker place and people need magic more than ever! An escape, a place to be able to experience something extraordinary. To make them feel like they belong no matter who you are. That’s what we always strive to do when we create something.

As a parent yourself do you strive to make the world more magical for your own child?

It’s hard as a parent to know how to show your child the world, you want to protect them and make sure they have the best experience but that’s not always real. I’ve learnt that my son is continually learning for himself and teaching me how to see the world, how to ask questions and view something that as an adult we have become blind to. I hope I can make the world a little more magical for my son and other people too.

What have you been up to since we spoke last? At the time you were working on Lessons Learned. What did you take away from that whole experience?

Lessons Learned was a truly amazing experience, one I am grateful every day! I’m grateful to the crew, the friendships forged, and the challenges overcome! The responses to the work and the journey that came after. I continued to work at Laika studios on Kubo and the Two Strings, and Missing Link. Before going onto the Dark Crystal, which was the project of a lifetime.

I’m currently on Guillermo del Toro’s Pinocchio which is very exciting and I’m looking forward to all that may happen next.

I actually got to see the original Dark Crystal on the big screen again last year. I went with some of the crew working on the series. While watching it I kept noticing the young guy next to me was truly engrossed and would sigh and react!, jump and clap as the movie went on. After I asked if he liked it, he said “Absolutely! I had no idea what it was! My friend told me it was about lizards that lived castle! It’s so much more than that! I can’t wait for the series!”

That was amazing to see someone experience the film for the first time and be so excited for what was to come! That’s why we do what we do!.

What role do you and your parents (Brian and Wendy) have in relation to the show?

My father was the conceptual designer on the show, my mother consulted on the geldings and also built wonderful creatures for the world. I was the design supervisor.

We did all sorts with the amazing teams that truly deserve the credit for making the world come to life again!

Do you think it is past time we see more projects that rely only on puppetry and less on CGI?

I feel it’s the right time, that people want puppetry! They want to feel and believe a character might truly be present in the shot or story they are actually seeing. I feel CGI actually works beautifully to enhance and bolster that idea. Working together we can now create truly amazing things!

What are some of the most challenging aspects of creating, anything that is done entirely with puppets?

(Laughs) The puppets! They are such a wonderful challenge to create, to build a character that can emote and carry a scene, that the audience will follow and believe in is the best sort of challenge.

Actually, the whole thing is challenging, building a whole world 4feet off the ground, sets that can break apart and be used with the puppets.

The team that was brought together to achieve the age of resistance was astounding! Every department and there are many!! Rose to the challenges set before them! Helmed by Netflix and Henson’s guided and driven by Louis Leterrier. We all went to work to create the greatest and largest puppet production ever achieved.

What do you think of Helena Bonham Carter, Mark Hamill, Simon Pegg, Keegan-Michael Key, and Andy Samberg providing voices for some of the characters?

The voice cast is wonderful! The talent that came on board is very exciting to have. Voicing the characters can be tricky to make them believable but I’m very excited by the cast for this!

What do you think it is about the original characters that have made them so enduring? Did you a favorite from the original film?

The original film has a magic about it! It’s was got people into the industry and what inspired people for generations. Everyone relates or responds to a certain character or part of that film. From Skeksis to Fizzgig.

I think it’s truly and simply that no matter which character you respond to. You believe them. They feel real! And that’s true magic.

I’m not sure if I have a favorite character, there are so many for me. Between the Chamberlain and Kira to the Landstriders!

Each one is wonderful to me.

How do you think the prequel series will differ most from the film?

The way the series is shot is amazing! The camera becomes a whole other living part of Thra almost. Moving around the world and characters as they battle their way through is stunning.

I also think it expands the world in a big way giving you a much richer tapestry!

This is the way you should film puppets!

Do you have a dream project you’d most like bring into existence?

Well I will say Dark Crystal was a dream project to work on! Truly the project of a lifetime for me! But I’m very excited for the future and things to come! I feel like this is the beginning and there are lots more stories to tell! Let’s hope the world feels the same.

Thank you! Thank you to all the fans who have loved the films and my family’s work for so many years. For the people who believe in magic and who want to see and experience more in their lives!

To the wonderful talented creatives who strive to show the world beautiful and wonderful things who work tirelessly to achieve greatness so kids and adults alike can be transported to strange new worlds and journey to realms unknown.