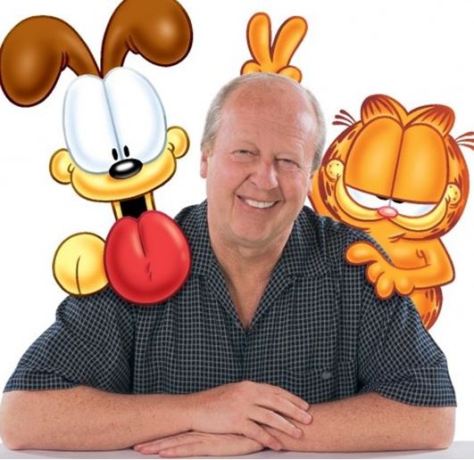 The following interview was conducted, years ago on a now defunct website The Damned Interviews, as it can no longer be found online except on The Damned Book of Interviews on Amazon, I figured I would offer it & selected others from the book here at Van Gogh’s Ear. Thank you for taking the time to read.

Who among us doesn’t admire Jim Davis for his hard work and creativity? His career in illustration began in 1969 and has made him one of the most prolific cartoonists there are. As the creator of Garfield, he created one of the most widely recognizable characters of modern day and that is no small feat. He also wrote or co- wrote on all of the Garfield TV Specials. Davis produced the animated series Garfield & Friends which originally aired from 1988-1995. Most recently he created the new CGI TV series The Garfield Show (of which he is also an executive producer) and works as a writer/producer for the Direct to Video CGI Garfield films. He also founded The Professor Garfield Foundation to promote Children’s Literacy. Jim continues to produce the Garfield strip.

Is it true when you grew up you had 25 cats? What was that like? Do you think that is why you chose to make Garfield a cat instead of a dog or some other animal?

Yes, it’s true we had at least 25 cats. They were all barn cats with a mission to keep mice at bay. I used to hang out in the barn and would observe that they all had distinct personalities. Some were aloof, some loved attention, some were playful, others wouldn’t budge unless the barn was on fire. I remember as a kid thinking that cats were kind of cool in their own way. They didn’t answer to anyone.

I actually started my cartooning career with a strip called Gnorm Gnat. My hunch was that nonhuman characters could be placed in many more interesting situations with greater flexibility that human characters. In that strip, Gnorm was the straight man (or gnat) surrounded by a bunch of weird characters:  Cecil Slug, Freddy the Fly, Dr. Rosenwurm. I submitted the strip to all the syndicates and finally one comics editor came back to me with some good advice. He said, “Your art is good, the jokes are funny, but bugs? Who can relate to a bug?” That’s when I started thinking about a new approach. I took a good look at the comics pages and realized there were lots of dog strips: Snoopy, Marmaduke, Belvedere…but no cats.  That was my EUREKA moment.

What would you say is your favorite memory from back then?

Did you also love to draw as a child?

Not at first. I was pretty terrible. I was asthmatic as a child and was forced inside and in bed for days at a time. My mom would encourage me to keep myself busy; she’d shove a pencil and paper in my hands and tell me to entertain myself. My drawings were so bad I had to label everything so you could tell what it was. Eventually, I developed a habit and couldn’t stop drawing. I remember sitting under the kitchen table and making little drawings on the bottom of the table. I’m pretty sure I drew on some walls, too.

When you first created Garfield did you ever dream he would have become such a huge character as he has? Why do you think so many people love him?

When I received the phone call saying Garfield would be picked up by the syndicate, it was the best day of my life. Everything since then has just been gravy. I think Garfield resonated with people for a couple reasons — Number one, I tried to keep the gags broad and the humor general and applicable to everyone. Most of the gags were about eating and sleeping. Everyone could relate. And then, I think people liked Garfield because it was the Jane Fonda era — everyone was being told to exercise and eat less. Garfield was saying, “Take a nap.” “Have a donut.”  He rebelled against the fitness trend and a lot of people needed that to relieve their guilt for being couch potatoes. 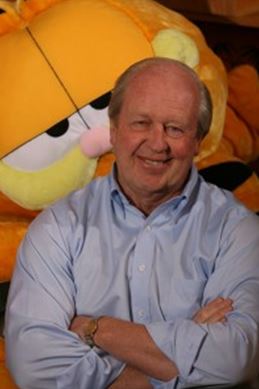 What do you think you’d be doing now if not for that?

Without a doubt, I’d be a farmer.

What was it like to see the specials based on your work be nominated for and in some cases win an Emmy? Was that a little surreal?

I’ll never forget the first show, “Here Comes Garfield.” It was 1981 and I was in a studio in California struggling with how to make Garfield stand up and dance. My all-time hero, Charles Schulz (Peanuts), happened to be working on a project in the same studio. He came by and I explained my problem. Sparky (as he was known to friends) provided me with the solution on the spot. He started drawing over my drawing, saying, “The problem is, you’ve made Garfield’s feet too small. Little tiny cat feet.” So he got Garfield, like Snoopy, up off all fours and Garfield’s been walking upright ever since. Talk about surreal.

Aside from Garfield which of your other characters did you enjoy creating most?

I really love Odie. He’s stupid but sweet, and for a character that doesn’t talk, he’s very expressive. It’s also fun to do strips with Jon Arbuckle’s parents and brother because they’re based on my own family. It’s fun to tease the people you love in such a public format.

How have things in the world of comics changed most since you first started your work in the field?

Comics editors are trying to squeeze a ton of strips onto the comics page so they’re all pretty small when they end up in the newspaper. I’ve had to learn to be a good editor — minimize the number of words and include lots of sight gags.

Can you tell our readers a little about The Professor Garfield Foundation? What led you to form that?

When I was on book tour, people would come up to me all the time and tell me that Garfield helped their child learn to read. The simple combination of pictures and words sparked their interest. After hearing this over and over, I thought there had to be something to it. I started talking to educators and they confirmed that comic strips were a powerful tool in teaching reading. My alma mater, Ball State University, happens to be a few miles away from the studio — they have one of the top Teacher’s Colleges in the country. We formed a partnership and the Foundation was born. Our mission is to provide a fun, interactive, online environment where children can safely explore, learn and creatively express themselves.

Do you enjoy creating works that appeal to children as well as adults?

Absolutely. My wife tells me I’m just a big kid, so it comes naturally. I have four grandchildren now, too, so they are giving me a great education.

Do you find that being a cartoonist helps you stay young at heart? Do you think that is an important thing do?

I make a living drawing a cat. How mature is that? I hope I never completely grow up — that would be very bad for Garfield.

Can you tell us about Paws, Inc.? Do you feel lucky to have the chance to employ and work with so many fellow artists?

Paws, Inc. is the licensing and creative studio that supports everything Garfield is involved in (TV, movies, licensing, publishing). The other artists inspire and challenge me. I feel incredibly lucky to be around so many creative people every day.

Is there any one interview question that no one has ever asked, that you wish they would?

Can’t think of anything…

What is one little-known thing about you?

What projects are you working on next?

There are a couple of projects on the table, but I’m not at liberty to talk about them just yet. Let’s just say, Garfield will be busy for a long time to come.

Is there anything you’d like to say to your fans/readers in closing?

Thank you for allowing a 66-year-old man to behave like a 12-year-old. I’m forever in your debt.