Can you tell us a little bit about your early days? What are your most fond memories from those days?

I grew up mostly around Atlanta, Georgia as the youngest of three brothers. I wanted to be like them obviously, so that’s how I got into comics and developed most of my taste for pop culture was through them. We had an early VHS camera and made a lot of home movies, with plots and characters and everything. They were very funny, I think a lot of it still holds up, but maybe just for me!

What were some of your favorite things from back then?

I loved everything G.I. Joe and I was always drawing from a very early age. It was a big deal when our neighborhood got wired for cable, and I loved all the original Comedy Central and SyFy channel shows. I was definitely into Monty Python, Mystery Science Theater 3000 and Kids in the Hall and all that absurdist comedy stuff from when I was around 8 years old. I loved Star Wars and all the movies my brothers would watch, which I would put on while I was drawing – like I still do today!

Do you remember what you liked to draw most often as a child?

My dream was to be a syndicated newspaper cartoonist, like my hero Bill Amend. I used to study Foxtrot comics like it was my homework. I wrote letters to Bill Watterson. I drew cartoon strips with a character named Dapper Dan who was a bit of a klutz! I also drew an action/adventure series called Tex & Laser, who were basically G.I. Joe surrogates. My friends and I would use that old dot matrix printer paper to design scrolling video game worlds. I think every child of the 80’s did that. I continued drawing comics for my high school paper and several times I sent out submission packages to syndicates.

What was it that first sparked your interest in art?

Art was easily my favorite subject in school and I strongly believe in the absolute necessity of arts education. My mother especially cultivated that and put me in summer art programs. She also took me to the local library often and I would always check out books on how to draw. As she likes to say, “We’re library people!”

Who are some of your favorite artists?

I am constantly inspired by working artists around me, especially those who left the safety of their day job to pursue their artistic vision. Zachary “Speczacular” Friedberg is a fantastic local pop artist whose work I admire. Photographer/director/fashion designer Ama Lea also springs to mind. She’s the genius behind the popular Year of Fear calendar and one of the hardest working independent artists I know. But the biggest influences on my formative years were probably Frank Miller, Mike Allred, and Roy Lichtenstein.

How does it feel to have your works compared to Roy Lichtenstein?

S’great! There’s the old saying, “If you’re going to steal, steal from the best.” I think Roy did that and I think I’m doing that now.

Why do you think society has always been so fascinated with the dark and weird?

We hope nothing bad is going to happen to us or to our loved ones, so we try not to think about it. But then curiosity of the unknown is overwhelming. 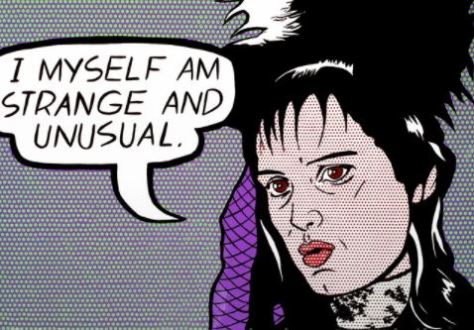 As someone who works as an artist as well as in film and television, do you love one more than the other? How do both of them compliment each other?

Well, it’s all storytelling! I don’t have any general preference between film and painting, but I do have mood changes from day to day. Some days I’m in the edit zone and I forget to eat or drink anything, other days I’m painting from sun up to sundown, and some days are in between. I try to follow my muse and just jam on whatever it is I’m excited about at the moment. That way nothing is ever forced but I’m always making progress. I feel very lucky to have multiple creative passions.

What do you love most about the act of creation in its various forms?

When I was in college, I was very into Malevich and this idea that creation is way to feel closer to a higher power, and I think there is still some of that meditative feeling in it for me. Hence, large compositions with a million little dots that take forever – something that I could easily do on a computer today if I were just trying to crank out images. As for film editing, I love bringing my unique vision to sometimes challenging footage. I consider the edit bay a magical place where anything can happen. I think that besides a director, the editor perhaps has the deepest fingerprints on a film. 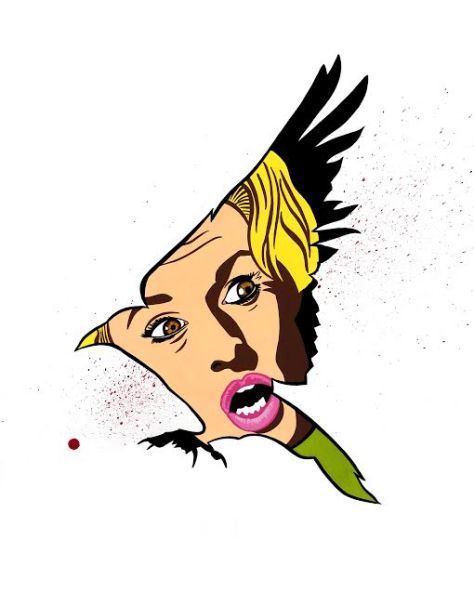 Do you have a dream project you’d most like to bring into being?

I want to create paintings on a much larger scale. Especially since I mainly paint movie icons, the larger size is more evocative of the movie theater experience. I would love to do a series of large, sequential paintings, like every shot from a full scene in one movie rather than just one shot for each movie. Someday I hope to have some public art and add to the fabric of this city that I love so much. And as an editor, I would love to cut a feature horror film.

Support living artists – the dead ones don’t need it! I’ll be at Gallery 1988 in Los Angeles on July 21 with the largest piece I’ve ever painted. Starting September 1, I’ll have some prints at the “Nasty Women: Boston” exhibition at Laconia Gallery, with 100% proceeds benefitting Color of Change and Planned Parenthood. Also in September I’m very excited to be part of the Slashback Video installation at The Bearded Lady’s Mystic Museum in Burbank. And hopefully next year my second documentary feature Keep On Running will be on the film festival circuit.