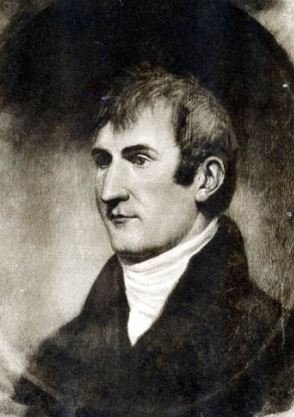 Icarus in a Canoe

For Meriwether Lewis of the Lewis & Clark Expedition

He stared at the empty whisky glass
on the cabin’s porch railing,
drifted into drunken clarity.
How he’d dared to be a Columbus,
trek even further into Eden’s Garden

of buffalo, elk and antelope, wild turkey feeding on hills and plains
as far as the eye could see, deer and beaver uncountable. And
coming down the river towards his canoe, a blanket of white feathers
three miles long, seventy yards wide. And further, the source:
acres of white pelicans preening in summer molt. Cottonwood,
redwood, condor and grizzly, coyote, the Rockies, finally, the Pacific. Paradise, danger, everywhere.

But now he could no longer sleep,
though he still spread bear skins
and buffalo robe on the floor.
Melancholy had driven him to wilderness,
then mania galvanizing all resolve
in the face of hunger, storm,
the Blackfeet, Shoshone,
the Sioux. Now,

at Grinder’s Inn north of Nashville,
he was near an end, though only thirty-five.
Perhaps he was not made for return,
for settling. Mrs. Grinder heard him
pace that night for hours arguing
with an unseen opponent. Perhaps
Rilke’s angel who simply refused
to fight.

In the early morning,
Meriwether loaded two pistols,
shot himself in the head with one,
the bullet only grazing his skull,
the other fired next at his breast,
the ball emerging low on his backbone.

After failed attacks by grizzly, malaria,
the outraged warriors, he could only stagger now
to his end—taking his razor, cutting himself
from head to foot yelling: I am no coward,
but I am so strong and it is hard to die.

Shortly after sunrise, Mrs. Grinder found him,
listened as his heart stopped beating.
Like any myth, the fall from rapture
the only human return.

The poems of Dane Cervine have been chosen by Adrienne Rich, Tony Hoagland, The Atlanta Review, and Caesura for acknowledgement and have appeared in a wide variety of journals including The SUN Magazine, The Hudson Review, Catamaran, Red Wheelbarrow, anthologies, newspapers, video & animation. Dane is a local therapist, and serves as Chief of Children’s Mental Health for Santa Cruz County in California.