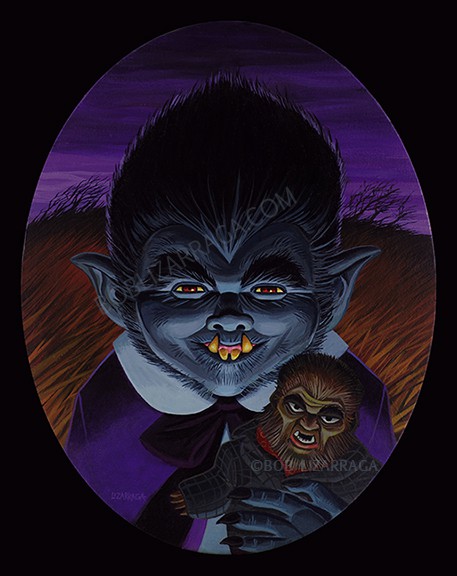 Bob Lizarraga is known for his unique take on monsters. Mixing classic horror elements and caricature in a way that appeals to fans of all ages has led to his work for such iconic companies as Warner Brothers Animation, Universal Cartoon Studio, Comedy Central, Nickelodeon, and Famous Monsters of Filmland magazine to name a few.

What were you like as a child? Do you think growing up where you did gave you an advantage when it came to pursuing your interests at an early age?

I’ve always been thankful for growing up in California, and having a mother that liked horror movies! She used to watch them with me, so I think the atmosphere was “safe” for me to watch scary flicks. Plus, I found monsters and grotesqueries immensely fascinating. I wonder what I would have been interested in if it hadn’t been for TV, which had an abundance of weirdness!

Did you always have an active imagination? Do you think that comes in handy in your line of work?

Oh yes–  my siblings were much older than me so my imagination grew as I spent a good amount of time alone. I had many friends, but I also enjoyed my own company… 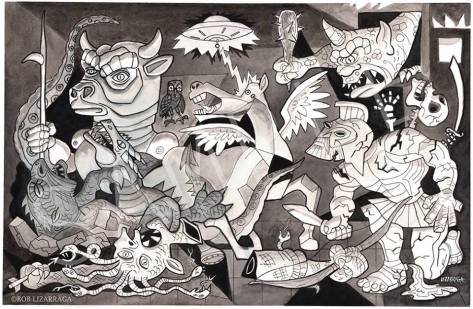 What first sparked your interest in horror? What was the first movie that really spoke to you? Do you remember what your first favorite character was?

My earliest influences were the movies on TV—they always played the Universal classics, and there were horror-show hosts as well. Crime stories and lurid Mexican melodramas were always on—one of my earliest drawings was a man under a white sheet with a bloody knife sticking out his chest. I saw that in some film. Thanks for not sending me away, ma!

Why do you think monsters have always held such appeal for the masses?

In my opinion, humans are fascinated with ALL aspects of living (and dying), and monsters and dark subject matter are needed to help gauge what is “nice” or “good”. Many cultures teach only the “good”, which of course makes the “bad” a tantalizing subject matter. Plus, some creative types just can’t resist a great grotesque visage. 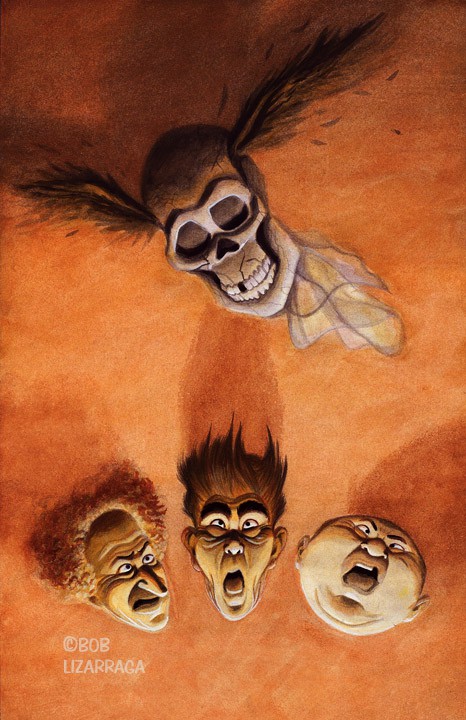 Why do you think the horror films of the past seemed more substantial than the ones made today? Do you think it is fair to say that their characters had more personality than those found in today’s films?

I’m a bit biased because I grew up with the Universal monsters, for example, but yes, The Frankenstein Monster, The Hunchback, and The Wolfman all had pathos—they were trapped by their circumstances, or didn’t ask to be shunned by the villagers. Mr. Hyde, The Mummy, Dracula and even The Creature had human frailties, and were just trying to exist in much the same way a dangerous animal would.

Do you think with the passing of so many of the legends of Horror that the genre is going to suffer?

I’m not really sure- it all depends on who wants to carry the torch (heh) for what went before. I work a couple of conventions during the year, and it’s so cool to see up and coming young creators who really “get” what the old school horror was all about. 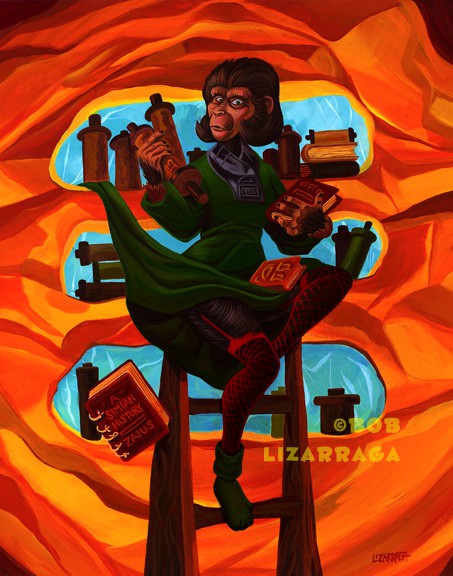 Are illustration and animation things you took up early on or did you develop that later on?

I always drew, but I didn’t really figure out what I wanted to do (creatively) until in my late twenties.

Who are some of your favorite artists?

Whoa–  it’s a LONG list! But I have to say the biggest influences on me were Basil Gogos, Mort Drucker, Jack Davis, (and all the MAD artists), Comic book artists like Jack Kirby (he drew great monsters). 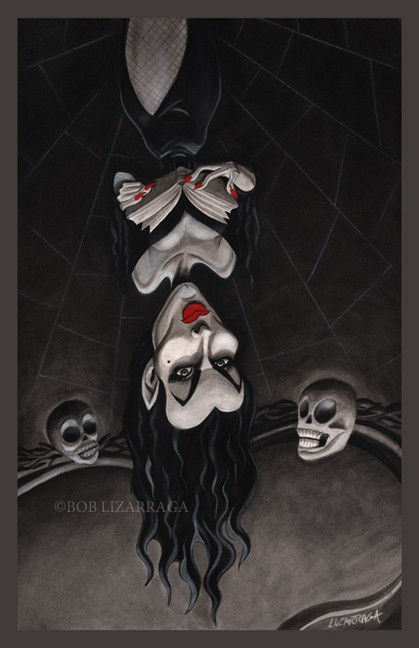 When did you first know it would be your career?

What IS a career, anyway? (laughs)I love working in animation design, but not all those types of jobs allow for creative expression. So I “feed the ‘gators” by finding the time for my own brand of weirdness.

What advice would you offer others wishing to pursue the dream of working in the artworld?

Pursue your own creative expression (draw or paint whatever the hell you want) and if you’re lucky, people will hire you to do more. But we work to live, so remind yourself that the not-so-fun-jobs are there to carry you to the next chapter. 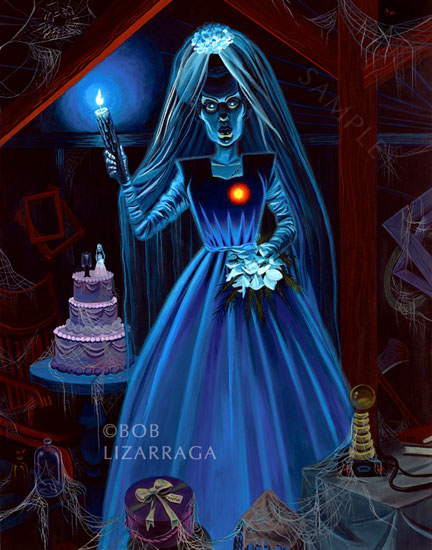 How does it feel to see your work being used by some of the top companies in the industry?

Its an ego-stroke for sure, and a validation of my work. I am in gratitude to those who feel my work has value…

How does it feel to be able to do what you love for a living?

It feels pretty good, thanks. George Burns said to try and love what you do for a living- he couldn’t wait to get out on the stage, and the icing on the cake was the money he made doing it. 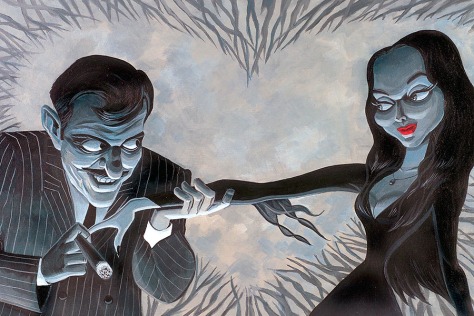 What’s that saying? —“Living well is the best revenge”. I like that. Again, I try to make time for all aspects: art, entertainment, work, love, friends, fun.

What would you say is the best advice anyone ever gave you?

A wise old animation designer once told me “Don’t let the bastards get ya down”. 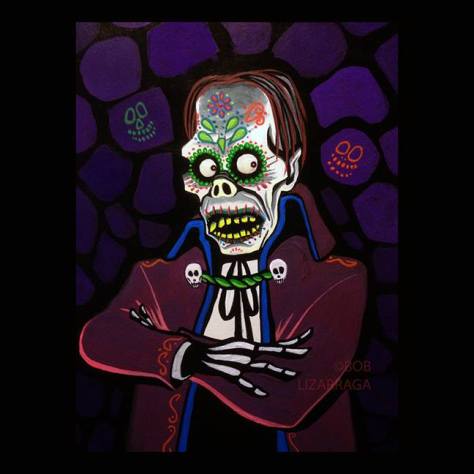 Do you have a dream project you’d most like to see come to completion?

Oh, man—so many. I’d like to do some short films, giant paintings, and throw a huge Halloween party.

Anything you’d like to say in before you go?

Just a big thanks for being interested in my work! Cheers~ 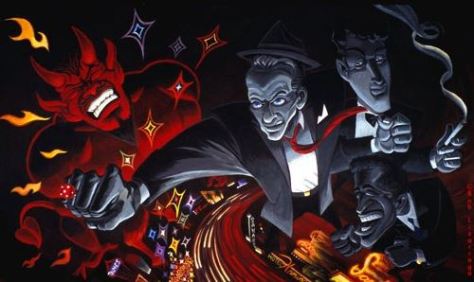 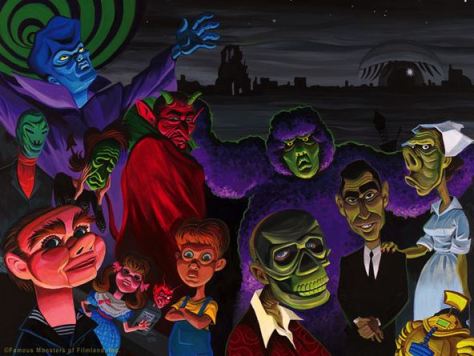 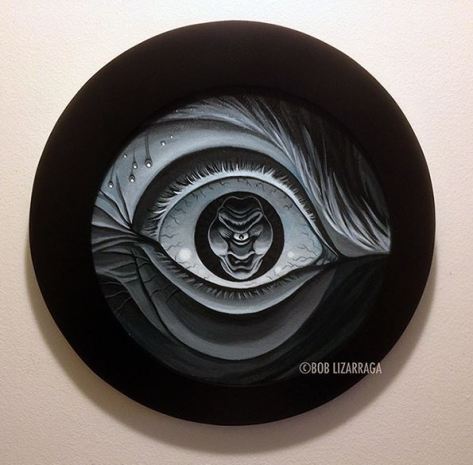 For more information on the works of Bob Lizarraga, or to purchase prints or original works please see:

3 thoughts on “An Interview with Bob Lizarraga”