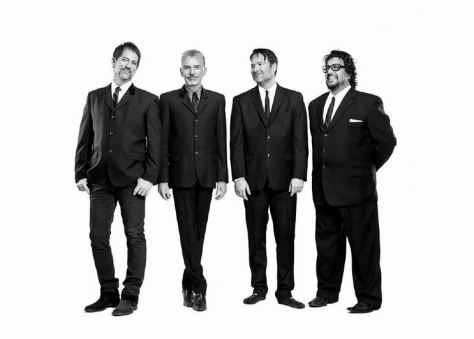 The Boxmasters is an Americana Rock and Roll band currently made up of Billy Bob Thornton, J.D Andrew, Brad Davis, and Ted Andreadis. Their fourth album, Somewhere Down the Road was released on 101 Ranch Records, April 7, 2015. It was an honor to sit down with the band for a glimpse at the men behind the music.

What were you like as a child growing up? What is your most fond memory from that time in your life? Did your love of music develop at an early age?

Billy Bob Thornton: My love of music developed when I was 3 or 4 because we used to listen to music around my Grandma’s house. It was mostly what was on the radio at the time, especially Jerry Lee Lewis and Elvis. A lot of Sun records. My mom loved Jim Reeves and Ray Price and people like that, so that was my earliest influences. I was a kid who loved baseball and music. And then I saw the Beatles in 1964 on Ed Sullivan and started playing drums because I wanted to be like Ringo.

J.D. Andrew: My family constantly listened to music. We always had the radio on and we loved listening to a radio show on the “oldies” station called “Solid Gold Saturday Night” and I would make cassettes of the songs and listen to them all week. I started singing in a church group when I was 6 or 7 and from then on was always in a singing group of some sort.

Ted Andreadis: There was always music in my house growing up. My Father played the mandolin. I started on the accordion when I was around 10 years, then picked up guitar.

Brad Davis: I was a loner and one that enjoyed being around older folks. I loved playing music with my family. I was a music student at the age of 5 learning bluegrass by ear.

Do you happen to remember your very first favorite song?

BBT: My very first favorite song was probably He’ll Have to Go by Jim Reeves.

J.D.: Mine was probably Surf City or Dead Man’s Curve by Jan and Dean or Elvira by the Oak Ridge Boys.

Ted: That’s a tough one.

Brad: Trailers for Sale or Rent by Roger Miller

When did you first know you wanted to seriously pursue a life of music? Does a little determination go a long way when dealing with the various rejections you encounter along the way, etc?

BBT: Well, I knew that I wanted to be in music right away when I saw the Beatles and the Dave Clark Five on Ed Sullivan. I had little bands that would play 3 or 4 songs like House of the Rising Sun and Hanky Panky. I played in bands later that played VFW clubs, high school proms, and college fraternity parties all the way up to opening for huge acts at coliseums and festivals by the time I was in my early 20’s. Then I went to California to seek my fame and fortune. But I never looked back. I always just thought tomorrow’s the day and rejection never deterred me.

J.D.: I had sort of an epiphany that I wanted to make records in college. I was always fascinated with equipment and loved setting up equipment for high school dances and parties starting in junior high. I had a band in college, but it was not my intention to be an artist. I was quite happy striving to be the most famous recording engineer in the world. And while I’ve had minor rejections, I’ve always believed that this is what I do, so I’m not going to be doing anything else.

Ted: I knew what I wanted to do [like most kids] when I saw the Beatles. As far as making it last you have to believe in yourself and know when it’s working and when it’s not. And when it’s not working and you’ve tried that’s probably the time to say Eh I gave it a good shot.

Brad: At the age of 10 I knew that I wanted to have a career in music. And I have had many failures but most all of those failures have led to amazing opportunities.

What is your favorite track off the new album and why?

BBT: I think probably the sentiment of What Did You Do Today is my favorite, and my favorite “sounding” song is This Game Is Over because it reminds me of late 50’s and early 60’s rock and roll songs. It’s really Roy Orbison-y-esque which I really like.

J.D.: Somewhere Down the Road is probably my favorite because it is one of the songs that I really remember writing. Vividly. I remember the A-Ha! Moment of when we decided to add the chorus after the pre chorus part, which we hadn’t been thinking about. It was just a really joyous moment when that song all came together. I’m also very jealous that I wasn’t there when Billy and Brad wrote, This Game Is Over. They wrote it and Sometimes There’s a Reason in a hotel room in Austin on the same day.

Ted: I like What Did You Do Today cause it‘s a song that rings true for everyone.

Brad: I like too many to pick just one.

What do you hope the fans take away from this album?

J.D.: I hope people take away that this is a serious fucking band that writes some serious music. We have all dedicated years to this band, going on decades. We don’t do this because we make any money, or because we think that it’s a fun vacation from our other jobs. We do this because we love it. We love our music. We love being in a band with each other. And we all respect each other and love what each other bring to the sound and camaraderie of the band.

Ted: That the Boxmasters are a group to be reckoned with.

Brad: I hope the fans take the emotional energy that we felt when we wrote these songs in hopes that it will transport them to a special place in time.

When can we expect to see the videos filmed for this one? Which songs does that include?

BBT: We’ve recently shot a video for What Did You Do Today that is currently in the editing phase, so that one will be first.

Ted: Right now we just got done finishing a video for What Did You Do Today.

BBT: I love to watch curling as meditation.

J.D.: Most fans know nothing about me so everything will probably be a surprise. But I was in a show choir in college at Kansas State and did a lot of “jazz hands”.

Brad: I am an NRNPSBB and this means I am a non-religious, non-political, saved bible believer that loves to rock!

Is there any particular moment from over the course of your career so far that stands out most in your mind?

BBT: I got to play a snare drum behind Porter Wagoner in L.A. right before Porter died. I was recruited along with Dwight Yoakum by Marty Stuart to play snare drum and bass behind Porter, so for one night I got to be a Wagonmaster.

J.D.: We played the “Ramble At The Ryman” with Levon Helm. Just the thought of playing the Ryman almost made me want to throw up, plus playing with Levon was just unbelievable. I’ve also played poker with Willie Nelson, which I mostly remember.

Brad: The first time I realized that I discovered my very own original guitar technique I call the Double-Down-Up

BBT: Family first, career second and if you can look back and say that you did it your way, mistakes and all, that you were true to yourself and to realize that you may have regrets but it is all part of what makes up a life. You have to look at every bad thing as something that makes you learn a lesson. And it also helps you write songs.

J.D.: Do what you enjoy. Read. Have an open mind. Understand that other people have different views on things than you do. Listen. Learn your history. Realize that most “entertainment” is just a distraction from what is really going on in the world.

Ted: Enjoying every minute, being thankful, and Love All.

Brad: For me it’s knowing that I have eternal security based on what Christ did on the cross and to share that kind of love with all

Are there any dream projects you’d most like to bring into existence before your time is up?

BBT: I just want to keep writing and recording as long as I’m here. I don’t know if there is a dream project other than seeing our rock opera Dinosaur see the light of day.

J.D.: I would like for us to have our own studio again sometime and be able to make records constantly. And someday have a power trio with my 2 boys.

Ted: I would love to play in a Blues Band with Billy Gibbons.

Brad: I have always wanted to record a solo instrumental record with a record label that would gain international distribution and as of May 2015 my record label Bluegrass Valley records and Sony Red Music group are giving my that opportunity for my 3rd contracted record for the label.

What do The Boxmasters have in the works for the future?

BBT: Much, much more.

J.D.: We never stop working so there is always something going on. We are going to start releasing our back catalog stuff on our website www.theboxmasters.com and we will always be writing. So there will always be more. We have 5 finished LP’s besides the one we’ve released now and a couple of hundred other songs that haven’t been grouped together for an album.

Brad: We have future plans to finally formulate, for all to hear, who we really are musically.

BBT: Stay between the lines and keep looking forward.

J.D.: Let’s stop hiding behind our phones and computers and get out and enjoy life as a society Does saying mean things about people in a comment section really make you feel better about yourself? Does being a bully to children really make you feel better? There is brilliant art, music, and culture being brought forth all over the country that needs an audience to survive. If we don’t support it, it will die and we’re all going to die with it.

Ted: When you go to the website to buy the latest record, don’t forget to buy a t-shirt.

Brad: I just want to say thanks to my band mates for their continual positive energy and to all the fans for being there to capture the moment with us!

2 thoughts on “An Interview with The Boxmasters”