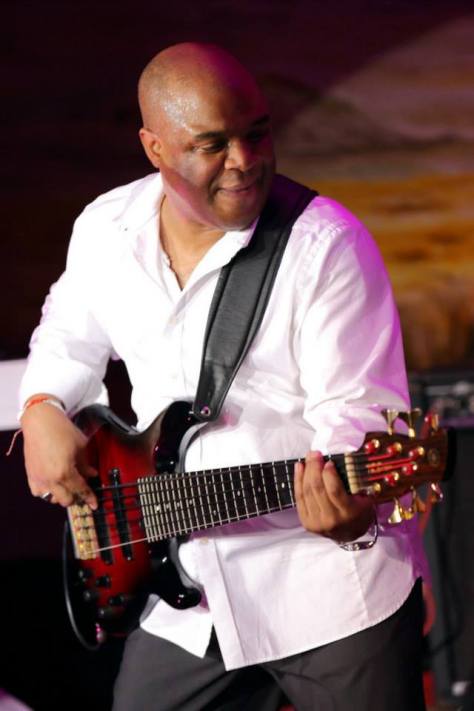 Charles Mack is the former bassist for Grammy Award winner James Cotton and Lucky Peterson. His work has spanned a wide array for genres. He has shared the stage with such acts as Inflatable Soule, Cypress Hill, Koko Taylor, Buddy Guy, Johnny Winter, Jimmy Johnson, and Kenny Neal, just to name a few. The can currently be found performing with Charles Mack Band featuring Eric Robert(Keyboard), Joel Tipke(Guitar), and Jarvis Oliver(drums)

At what age did you first discover your love of music? Can you remember what the exact moment was like when you first realized how powerful music can be?

As a child, I would listen to my family play blues, I had no idea what they were doing, I just knew the notes, along with their singing relaxed me. I was around 5 years old when I first noticed it, even though I heard it when I was younger, I just didn’t know what it was until age 5. Music has a way of making changes in the spirit. I used to cry a lot, but my mother would play jazz and I would immediately stop crying and fall asleep. The feeling I had when I was 5, from what I remember, music was like a warm blanket on a cold night, wrapped tightly, embracing every element of your being. I had a feeling of pure happiness, enjoyment, and fulfillment.

What are some of your very first memories pertaining to music?

The very first memories pertaining to music were of being around family, a room filled with guitarists and singers. When I was younger, my father, aunt and uncle would get together and play music, playing blues. I was amazed at how happy it made them feel. I had never seen my dad smile so much. My aunt played slide guitar, my dad and uncle were straight blues, finger pickin’ (rhythm and solo). The happiness that would come out of my family from playing music was incredible! The feeling that they were getting, I wanted to feel. This is by far, the best experience I have had as a child regarding an incredible feeling/experience pertaining to music.

Who were some of your earliest influences? Do you happen to remember what your very first favorite song was?

My earliest influences were, Bach, Miles Davis, Coltrane, BB King, Muddy Waters, The Supremes, The Dells, Earth Wind and Fire, Ron Carter, Charlie Parker, R Vaughn Williams, Copeland and Big Momma Thorton. I was a weird kid and I listened to everything. My first song I ever heard was a Luis Jordan song, my mother would play his music quite often around the house. Run Joe, 5 Guys named Moe ; the list goes on and on.

What was it like to get your first bass? Is that a memory that is etched in your mind?

If you could only see me now (smiling). My first bass was actually a broken acoustic guitar with 4 strings on it. That’s how I learned how to play. I had no idea what I was doing but I would play what I heard. My first real bass guitar, took me 6 months to buy, I purchased it from a pawnshop in Chicago. $150 was the cost and it took me 6 months to save up money from doing odd jobs; collecting scrap to take to the junk yard, picking up cans from garbage cans around the city, newspapers, etc… I appreciated having this bass, I had it with me for over 20 years until I got desperate for money and sold it for $250 to a music store that ended up selling it for $2,500.

How did your first break in the industry come about?

Well, I had been playing music for years. Playing tuba as a child (12 years old) for professional brass ensembles. When I lived in Seattle, I had the pleasure of performing with the rock band, Inflatable Soule. It was a great experience. We performed at many venues, and that was exciting. We performed at Jacks’s Sugarshack, the Viper Room and the list goes on. I was able to meet some great artists, Chris Cornell, members from Alice in Chains, Krist Novoselic and so many others. After Navy band and being in Seattle, when I was in my 20’s, I moved back to Chicago. I played a little but just wanted to party mostly. One night, I was playing bass guitar for a blues artist (Charlie Love) and in walks Lucky Peterson. At first, I thought it was some kind of joke. He was asking musicians about me then finally, he came up to talk to me. I was a little nervous because I had played a lot of his music when I was a younger. He asked me if I would like to go on tour with him, at first, I thought, I am not good enough but then I said to myself, nothing ventured, nothing gained. His agency called me, asked for my personal info along what I will be making. Wow! Our first show was to about 10,000 people, on a big stage where we had a tech for everything. I said to myself, this is where I need to be! It was an incredible feeling!

What does your touring gear consist of?

My gear is very basic. I don’t use pedals or extra outboard gear. Just a Hartke set up (Head and cab). I have my 6 string bass, Yamaha TRB-6p and that’s it. I follow the Jaco concept; your playing comes from your fingers (smiles).

What do you love most about being a musician?

The thing I love about being a musician/artist is the ability to be able to inspire, to be able to touch someone through your creation. Before I do a show, I would always pray and ask God to let me touch at least one soul, to let me help someone through something they are going through. After each show, I would always get someone that would come up to me and say thank you, they would tell me their story and tell me how my music helped them. It may not be through the lyrics, it may just be how the musicians performed together. I thank God every day for this blessing; I wouldn’t trade it for anything in the world.

As someone who has worked in so many genres over the years, is there any one genre you hold more dear than others?

The closest and the most dear to me is classical, it’s what I listened to the most when I was growing up and venturing out.

What does it take to make a truly great song?

What was it like to play alongside Johnny Winter and Buddy Guy? What did you learn from them?

It was amazing! Knowing that these guys are legends and learning on the same stage from them. Johnny Winter was a very quiet person, very nice guy! The history he has and where he has been, it was an honor sharing the stage with him. Mr. Guy, Buddy Guy, the real deal. Very nice guy, he had a way to make you give him what he wanted on stage musically! A show I did at his club, he did a song with us. I remember it was a packed house and Buddy silenced the band, we played very quiet. He said, “Ladies and Gentlemen, I want you to give these guys a round of applause”, he said, “They are the next generation of the blues”. Appreciate these artists now, you may only be paying $5 to see them now, but soon, you will be paying over $50 to get in to see them. Buddy has a respect for artists, especially artists that started as supporting artists. He’s a great person and I have much respect for him.

Are there moments in your career that stand out more in your mind than others?

There are moments in my career where I wish I had done things differently but the only thing I can do now is learn from it and keep it moving. The first time I met James Brown, I would have taken more time to talk and learn than looking for the food and wine. The first time I recorded with Koko Taylor I would have spent more time talking and learning from her than arguing with my ex about picking up groceries on the phone.

Do you have any interesting stories from over the years that you would be at liberty to share with our readers?

There are so many stories, the artists I have met, the opportunities that could have been. I will be releasing a book in 2 years about being a musician, it will be in there. I had a chance to meet some incredible artists, history makers and trend setters. Sometimes I wonder, if I had done this a certain way, where would I be. I learned valuable lessons from some of the heavies in the industry and now, I am starting to apply what I have learned.

What was the best advice anyone ever gave you in regards to the music business? And to life in general?

There was one thing that stuck out the most in my musical career. I was touring with an artist and he said “Charles, I want to tell you the secret to success as a musician” He said, “I am not the greatest musician, nor am I the greatest singer” He said, “There is only one thing that is truth to how to make it. “ He leaned in, and he said, “a great publicist!”I thank him to this day because it is the truth. Getting your name out there and keeping it out there.

Can you tell us a little about the Charles Mack Band? What is it like to work with the guys in the band?

Well, I am happy to have the musicians that I currently have working with me. Eric Robert is an incredible keyboardist that sings as well. He also performs with Vicci Martinez and several other well-known musicians. Eric Rocks! Joel Tipke is by far, the best guitarist I have worked with, and I have known Joel for over 20 years. We started playing together with Peter Cornell with Inflatable Soule. One of the most incredible bands I have had the pleasure of performing with (Peter, Katie and Susie Cornell, Dave Hill, Joel and myself), Jarvis Oliver, a young and incredible drummer! With this combination, we bring the most incredible sound. It’s a mixture of blues, rock, funk and soul. Kind of a mixture of Hendrix, Ben Harper, Seal and John Mayer (x10).

What are you all looking forward to bringing to the world in 2015?

In 2015, we are looking forward to releasing a new album and touring. We are currently working on Asia, Europe and the states for doing concerts.

I would like to say that with music, it can take you wherever you want to go. It can take you on adventures and give you some wonderful experiences. Stay true to your craft; never give up, no matter how many tell you to give up. Inner strength and belief is important. Not everyone will see the world the way an artist does. Steadfast to you and your art.