Peter Cornell has worked in the music industry in such bands as Inflatable Soule and Black Market Radio and as a solo artist. His latest release Champion features former Pearl Jam drummer Dave Abbruzzese on drums.

What were you like as a child? What are some of your most fond memories from that time?

I was a little hyper. Consequently I got in a bit of mischief. I was also fairly bright and did well in school when I could stay out of the head master’s office. I love being outside. I love playing football and basketball and when I got to be a teenager I learned how to sail and raced sailboats for years. Sailing, the sea, the water, boats of all kinds are still a huge love of mine.

What was it like growing up with Chris? What has been like getting to watch him succeed at doing something he loves? Do you ever get tired of people mentioning the connection there?

As adults, we have always been close. As kids we were kids and pulled each other’s hair and pinched each other’s arm. But I would crush anyone who ever threatened to lay a hand on him. Then and now I love the man dearly and have always taken a paternal pride in his success. Somewhere along the way I took an interest in music and honestly Chris has mentored me every step of the way and still does. If I hated him it would probably bother me that I get a lot of questions about him. But I love him so I don’t mind if people talk to me about him. But family is very private for us so my answers are limited.

When did you first discover your love of music? What was that experience like?

Our neighbors had older brothers and we used to sneak and listen to his Beatles records.  And we also discovered the Who, The Guess Who, and Zepplin. And Floyd. And Marijuana (a wicked combination of discoveries). I would never be the same.

Do you think music and other artistic talents can be inherited as well as learned?

Absolutely. I think anything can be learned. I had no latent musical talent. But I had desire to learn how to write a song. I was surrounded by the likes of Andy Wood, Chris Cornell, Layne Staley and Stone and Jeff from PJ. Amongst others. Me and my bro were roomies and these were the guys that were hanging out on a regular basis. I was fascinated by song writing and how it worked. Coincidentally, about that same time, my girlfriend gave me a guitar for Christmas, we broke up, and I took a job sailing around the South Pacific for a year. While I was at sea I learned how to play, I learned every Beatles song I could and I was inspired by the crazy shit that was going on in my world and low and behold, I learned how to craft a decent tune.

When did you first take an interest in guitar? What advice would you offer those just starting to learn?

As I said above. My girlfriend gave me a guitar for Christmas as a distraction (I was a troubled 20 something) and she thought I needed a hobby. I then went to sea, had a desire to be a song writer and I played that guitar until my fingers hurt. Even if it sounded awful. I just kept playing everyday. It scares me that kids today would rather play video games, or computers, or text than sit in a room and shred on their favorite instrument for hours even days at a time.

Since there isn’t a lot about you out there, yet, can you tell us a little about what has made you who you are today?

I am a product of the school of hard knocks. I have had many opportunities in my life yet I have sometimes followed the crooked path. I am not bitter, I hold myself accountable to and for myself. One of the amazing gifts the universe has given me is perseverance. I’ve always managed to land on my feet. I have made music now for a little over twenty years, and because of that drive to persevere, I am making the best music of my life.

How have your musical tastes evolved over the years?

My first concert was Billy Joel. My first vinyl was Johnny Cash Live at Folsom Prison (when I was in fourth grade). The record I wrote before Champion was called Black Market Radio. When I wrote BMR I listened to only three things; The Complete Zepp catalogue, the first Cars record, and Alice Cooper’s greatest hits. When I did Champion I listened to a ton of Curtis Mayfield (didn’t influence the sound of my record) Chris Cornell’s solo records, Alain Johannes, STP, and all things Zepp (I like guitar hooks and Page wrote ALL the good ones so I steal as much as I can from him).

What are your thoughts on the current state of the music industry in general?

For a rock musician, there is no more music industry. We rock musicians are here in the world of the interweb making our own rock industry. And in many ways I think it is far superior. I hate that reality TV has made being a musician sort of the same as being a contestant on the Price is Right. Not to say there aren’t great singers on The Voice, but where are the garage bands and the kids shredding on guitar and gritty, gut wrenching songs from guys pouring their guts out while they are trying to get a deal? The most visible music today is not necessarily the best or most organic or most legitimate. This is only my opinion of course. 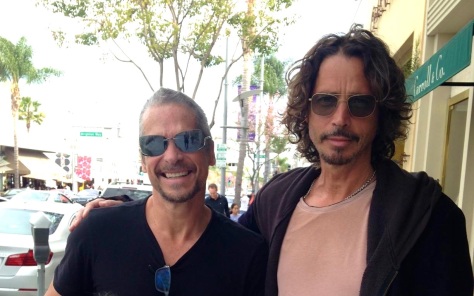 Do you think determination and dedication are a must these days if one is going to devote their life to a career in music?

Determination is a must in anything you wish to succeed at. I think. It also takes dedication and partial insanity.

Do you get nervous when you release your work to the public?

Always. These songs become your children. It took me over two years to get this done, because I built my own studio and wrote and played everything myself (except for drums which came later). But after you have lived with this material so privately for so long, you lose perspective and you second-guess and it becomes so safe just to keep it to yourself.

How did the album Champion come about?

My girlfriend dumped me (common theme I guess). I was going to quit music as part of my heartache but instead I hid out in the attic of an old house in Maine for six months writing and recording songs about my broken heart. After 6 months I moved back to NYC with the intention of quitting music again. I couldn’t do it. I had all these songs that wanted to come to life. I discovered Macbook Pro and Logic and software and home recording and I built a studio in my apartment in Brooklyn and I locked myself in the lab and I went to work to do the best work I have ever done.

Besides Dave, who else do you work with on it? What do you love most about this particular album?

It’s just me and Dave. I used drum software to write the record with the intention of replacing it with a real drummer when I found a real drummer who would do it. What I love most about this record is that I reconnected with Dave Abbruzzese after 15 years and he played on my record. He found me on Facebook a year ago, right when I was looking for a drummer. I knew him in Seattle years ago( he mixed some songs for me) but we never got to play. So having him on this record is nothing short of a miracle. I played all the bass, guitars and vocals.

How does solo work differ most from band work? Do you prefer one to the other?

I did a record with a great bass player named Keith Mannino in NYC in 2005-2007 called Black Market Radio. It is a true collaboration and it is a great record and great collection of songs. I enjoyed that as much as I enjoyed doing Champion on my own. The hardest part about dong it yourself is self-editing. Knowing when to say when. I re-wrote and re-recorded at least 5 songs completely on Champion, because when I did the first version my “self editor” was faulty. So if you can work with somebody whose ears you trust, you might be able to work a little faster. The coolest part about working alone is you can take as much time as you like and work when ever you want even if it’s the wee hours of the morning.

Are there any things about you that your fans might be surprised to know?

I have no children. I was only married once for two years. I’m older than I Iook. I’m a very bad dancer. I really want to get my license to fly small private jets.

Do you have a dream project you’d most like to accomplish?

A record top to bottom written/recorded with Chris Cornell, Dave Abbruzzese, Peter Cornell, Dave Mustaine on lead (most amazing lead player I have ever met) and produced by Rick Rubin because his records all sound so cool.

What do you think the key to a life well lived?

Love, sobriety, sex, children, puppies, take care of your body, find that thing that defines you and throw yourself into it with all you got. And go sailing once at least it will change your life.

What projects to you look forward to bringing into being next?

I’d like to do another solo record but invite other guys to play on it. I think I have the formula of how to craft it down to a science, but I would like other flavors on it. Especially guitar work from better lead players. I have a bunch of tunes ready to start working on.

Thanks to you, your readers, and everybody out in the virtual world who is devoted to any kind of art. Technology is eroding our creative juices. I think what you do is pivotal to keeping it from ever disappearing. Much Love.

One thought on “An Interview with Peter Cornell”