Becket is perhaps best known for his work as Anne Rice’s assistant and for his own tales in The Blood Vivicanti and the Children’s book Key the Steampunk Vampire Girl. Long before all of that he was a Benedictine monk with a master’s degree in theology. His love for music began around the age of 11 when he formed a band with Sam Rivers who is now the bassist for Limp Bizkit. With his first self-titled album now available, it is an honor to sit down with him and learn more about what led to its creation.

What was your very first favorite song?

Michael Jackson’s Beat It. My dad gave me a 45 record player, and his dad owned a jukebox. They were always giving me records. But that one I played over and over and over again. That and Phil Collins’ Sussudio.

Do you remember what it was like to meet Sam when you were 11?

I remember he transferred to my school. He and I started playing musical instruments together, he on guitar and I on bass. But then we switched one day, and now he’s a brilliant bass player.

Who are some of your earliest musical influences?

My biggest musical influence, which has remained with me ever since, was the first time I learned Metallica’s One. I was playing Hetfield’s opening bars. A friend, John Otto, had another guitar and he began playing Hammett’s solo. It was the first time I had ever heard real music harmony. The sound of our two instruments making music gave me chills. Still does.

Did being a monk change your taste in music a little?

It refined my taste. Before I was a monk my music was very intellectual and difficult for performers and the listeners. Being a monk helped me be more practical, which in many ways meant finding the beauty of writing a simple music. Now that is all I write.

Are people often surprised to learn that you used to be a dedicated monk given your current line of work?

Sometimes that happens. But I am an introvert and I do not share those details in conversations unless asked. I just write about them and put the monastic experience in the world.

Do you love all genres of music equally or are there some you prefer over others?

I like music that feels good and music that makes me think. The Dave Matthews Band is a perfect example. Under the Table and Dreaming is one of the best albums of the 90’s because it combines folk and funk peerlessly. Try singing and playing Satellite at the same time. It’s brilliant work. Some songs by a new band called Gungor does this too. But I also like instrumental composers like Arvo Part.

How do you balance your time as an assistant, an author, and a musician?

I am fortunate enough to have one of those jobs that provides a flexible schedule. But I also have the discipline of waking up at 4am and beginning my morning routine, which starts with prayer and then journaling, and then into a few hours of writing either books or music. The rest of the day is spent with Anne.

What was the most challenging thing you faced when creating this album?

The most challenging aspect of creating an album is that I am doing it on my own. I have friends like Raven Quinn, who has two albums out, and she has shared with me her experience with digital sales, CD manufacturing, and marketing. I prefer writing, and I would rather leave the cleverness of marketing etc. to other clever people.

What are you hoping your fans take away from this album?

Similar to my poetry, I hope that people can relate to the expression of thought and emotions in the songs. Each one is a reflection of how I like to listen to music while I think about other things. It’s background music for my brain.

What can we expect with this album?

Expect it to be mostly an instrumental album, utilizing cello, piano, and violin. But there are some rather large orchestral pieces too, and a soprano singing in elvish.

Is Anne a fan of your music? What do you think is the most important thing you have learned from working with her?

The most important thing that she has taught me is to create the art I want to experience. I wanted to hear every note I composed. So I composed an album that made me happy, but at the same time I considered how other people would react to it. I think it reflects my life so far. It is an album to evoke contemplation.

If you could work with anyone in the music industry who would it be and why?

Do you have a dream project you would most like to complete?

The fact that I am being productive in ways that make me happy fulfills my dreams.

What projects are you working on at the moment? Do you plan on releasing more albums in the future?

I have a symphony I’m working on. And I am also writing small tunes for larger works that I hope to put out in 2015.

For more information on the album please click the photo below: 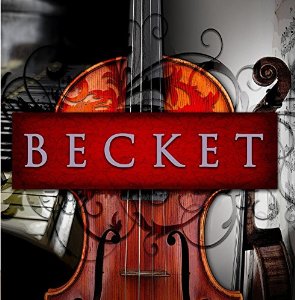 One thought on “An Interview with Becket”