From her role as Broadway’s original Rizzo in Grease to her television roles on Maude, The Twilight Zone, The Drew Carrey Show, Carnivale, Grey’s Anatomy, Revenge and countless others, to her appearances in films such as Fog, Creepshow, Swamp Thing, and Escape from New York, to lending her voice to Catwoman on Batman: The Animated Series, Adrienne Barbeau has proven herself one of the most versatile actress in the business today. She recently wrapped up filming for a role on Sons of Anarchy which will air this November. Her latest novel Love Bites is available on Amazon.com in ebook form.

What were you like as a little girl? What would you say are your fondest memories from that time?

I honestly don’t remember much of my childhood before the age of 12. Except for spending summers on my grandparents 20 acre grape farm in Selma, California. My cousins and I played a lot of Monopoly, I helped my grandmother make Armenian food, and wrote long, long letters with plays I made up with titles like The Secret Life of Kenny Turner. I have a feeling Kenny Turner was a 5th grade classmate.

Did you always have a love of acting or did that develop later on? What first sparked your interest in it?

Someone told my mother I could sing, so she decided I should study voice. When I was 15 and working as a receptionist in a beauty salon, my boss suggested I audition for a production of The King and I being staged by the San Jose Civic Light Opera. They cast me as Tuptim and I began doing musicals.

Is it true you got your start working for the mob as a go-go dancer? What was that like? What did you learn from that whole experience?

The best answer to this question can be found in the chapter titled Matty’s Mardi Gras in my memoir There Are Worse Things I Could Do. I didn’t know it at the time, but my boss was a top guy in one of the “five families”. Or something like that. And I’ve been told that we girls who worked at Matty’s were the very first discotheque dancers in New York. What did I learn? The meaning of the word SWAG.

What was it like to have to appear nude in front of an audience for Stag Movie? Do you think the world is too uptight when it comes to the subject of nudity?

Stag Movie was an Off-Broadway musical I starred in after playing Tevye’s daughter Hodel in Fiddler on the Roof for two years.  I hadn’t originated the role in Fiddler, I was a replacement, and so I had yet to be reviewed as an actress in New York. And that’s what I needed as the next step in my career. So when Stag Movie came along, with the opportunity to sing and dance my way through 15 musical numbers- albeit several of them in the nude – I just saw it as my next job. Oh, Calcutta had been playing for awhile, and Hair and Let My People Come. I was more worried about how well I was singing (upside down on a raked stage at one point) than what I wasn’t wearing while I was doing it.

How did you feel when you first gained the status of a sex symbol? What are your feelings on that in general?

I never saw myself as a sex symbol and it certainly wasn’t something I was trying to achieve. I don’t mind the label, though, as long as I’m happy with the work I’m doing.

What advice would you offer the women of tomorrow and women in general in regards to body image versus true beauty?

Several years ago, Sixty Minutes did a segment on Anouk Aimee. She must have been in her fifties at the time. Every line on her face screamed sensuality. I couldn’t take my eyes off her. That’s beauty – the self-acceptance she personified. Every time I see someone who’s mucked up their face with fillers or Botox or surgery, I cringe. Do they really think they look better than they did when they looked real?

Do you prefer stage work to filmed work or do you love both equally?

It really depends on the role. Although I’d much rather start work at 6 a.m. than 8 p.m.

Did you ever imagine when you started your career you have appeared in over 25 musicals and so many television shows ?

I never really thought about it. Just took the career one step at a time. I love what I do; it’s never once felt like work to me. Having a job is a gift.

How do you think the industry has changed most since you first began working in it?

Ways too numerous to mention. Tabloid journalism leading to careers based on something other than talent. Reality television. The proliferation of cable programming. Businessmen making creative decisions. Some of it good, some not so good, but major changes nonetheless.

Do you have any interesting stories from over the course of your career that you might be able to share with our readers?

Now for that, you’ll really have to read the memoir.

Are there any characters you have portrayed that you hold most dear?

I love Ruthie in Carnivale, Stevie Wayne in The Fog, Billie in Creepshow, Maggie in Escape From New York, Golde in Fiddler on the Roof. 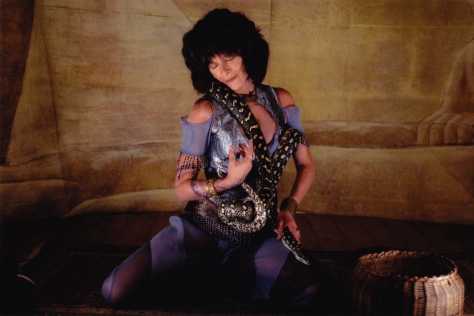 What was it like to give birth to twins at the age of 51? Do you think your parenting style changed much with their arrival as opposed to your first child?

I was 38 when I had my first son, so, no, my parenting style was pretty well established. I’m incredibly patient and probably a little too permissive, and I try always to understand life through my boys’ feelings.

What do you love most about being a mother?

All of it – except having to cook dinner for 3 boys who don’t like any of the same foods the others do. We order out a lot.

What led you try your hand at writing?

That’s also in the memoir. I believe my closest friend, who’d died from breast cancer, sent me a message that that’s what I was supposed to do. Doesn’t get any weirder than that! 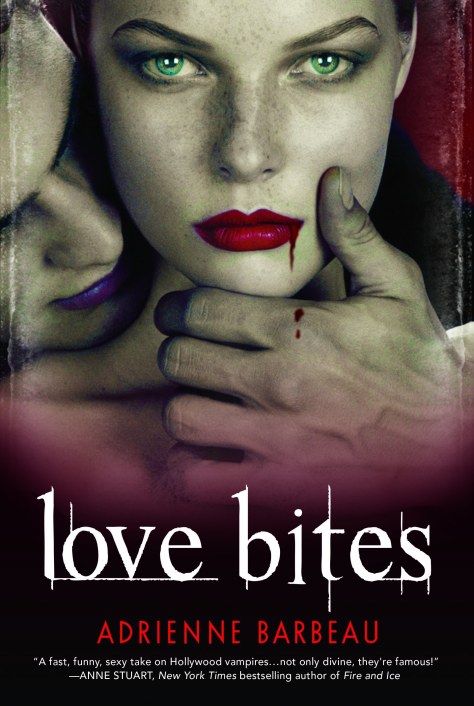 What can your readers expect from Love Bites?

Love Bites is a witty (well, I think it is) detective novel about a Hollywood Scream Queen (they say write what you know) who happens to be a vampyre. In fact, she’s the head of the Vampyres of Hollywood (who are most of the A-list actors, including Orson Welles and Charlie Chaplin.) It’s sexy and fun and it gave me a chance to tell stories (about my business) out of school.

I’ve never liked the taste of alcohol, don’t care much for water, and drink at least a quart of grapefruit juice a day.

Just filmed an episode of Sons of Anarchy and I’m writing the third book in the Vampyres of Hollywood series. 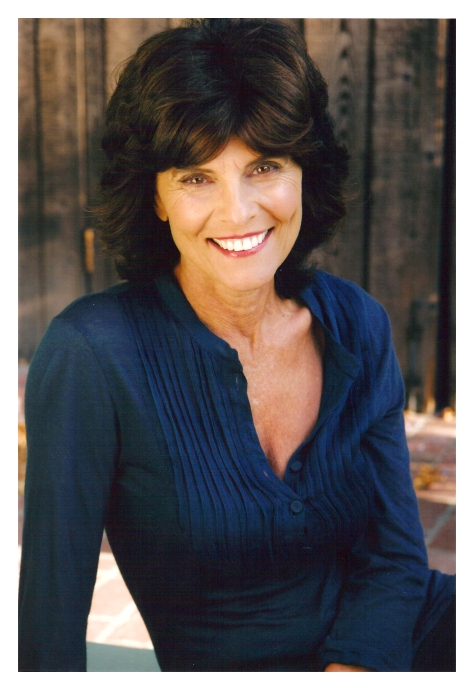 How do you hope to be remembered when your time comes?

A great mom, a loving friend, and someone who was good at what she does.

I’m on Twitter  @abarbeau  and Facebook – the Adrienne Barbeau page where I talk about my sons’ soccer team is the one that’s really me, and my website is abarbeau.com. And I’d love it if all your readers bought the ebook version of Love Bites which is available on Amazon and really cheap!

2 thoughts on “An interview with Adrienne Barbeau”