The Train to Viareggio, an ode

The train to Viareggio was crowded. This particular train went on to La Spezia. A bunch of kids got in near Pisa, heading for the beaches in Cinque Terra, where the water is bright blue and there’s a nude beach. They sat on the floor of the train blocking the aisle, so the conductor couldn’t get through if he tried. They had an hour to go because they would have to switch trains at La Spezia. There’d been a strike the day before, and the 90-degree heat sent the pent-up demand to the beaches of the Italian Rivera. We were going to Viareggio because we could rent an umbrella and chairs, and the food was cheap. The overloaded train was noticeably slower as we moved along. The landscape had slowly changed, and now we looked at salt marshes where the smell of the sea was strong. We stopped at a commercial port, and then stopped at Viareggio Centrale. When we stood up, a couple got up from the floor and took our seats; we gently stepped around the people sitting in the aisle as we headed for the door.

“We don’t get out here. We have a few stops to go,” a man with an Australian accent said to some people as they were starting to get up. They sat down, a little disgusted. Air conditioning is not Italy’s strong suit, and there was almost none on the train.

We stretched our legs. The trip from Florence had been longer than we’d expected. The kiosks had not been working at Florence SMN, and it took some time to get our tickets. We walked down the avenue to the beach, past oleander-lined streets, and across a busy coastal road, stopping at the Supermercato Conad to buy some bottled water and snacks.

The path to the bright yellow umbrella was hot and burned our feet. We sat in the chaise lounges, under the umbrella that had cost us twenty euros, and looked out over the sea from one of the oldest resorts in Europe, the place where Czars spent the long Russian winter, and where Shelley was cremated after he and his friends drowned when their sailboat sank in a sudden summer storm.

Naked children ran down the beach, not seeming to mind the hot sands. The blue water was full of people, many of them with water toys, and as we walked along the beach we could see that the marble-capped mountains were covered in a fine haze. That’s when the body washed up on the shore directly in front of us.

Fully clothed, right down to fine leather boots, the unfortunate sailor had recently drowned. There were no signs of life, no need for heroic CPR, nothing would help him now; several people had their cell phones out and were calling the police. Others scrambled to get their little kids away from the dead man. We helped the life guard pull him by his arms, so the waves wouldn’t drag him back out to sea, and then we sat on our towels waiting for the authorities. He was white, so we knew he was probably not an illegal immigrant from North Africa; he was very pale white, and had a pretty face.

Two paramedics, both with large sweat rings under their armpits, carried their gurney through the broiling beach sand. They checked the body, and then waited. The coroner would have to release the body to them; he was on his way. A small, skinny man with a thick moustache came to the beach. He and the two paramedics were the only ones there who were fully-dressed. They asked the life guard a bunch of questions, and the skinny guy filled out a form.

The two paramedics strapped the body to the gurney and carried him off the beach. There was a depression in the sand shaped like the back of a dolphin where the body had lain. We looked at the depression, and then carefully went in the water. People were talking about him. My Italian is bad, but I could understand bits and pieces, like a bad recording that fades in and out. Someone said he was English, that they knew him, or had seen him. He had a sailboat. There’d been a bad storm last night. Maybe he had been caught out in it. He had a young wife up in Genoa. She must know something is wrong by now.

We decided to go in for a swim. There was nothing more we could do. The water was cold at first, but that was because we were so hot from being on the beach in the sun. I went in up to my neck, and stood looking at the dome on top of the hotel Excelsior and the mountains in the background. The sun was getting more intense. I got out of the water first, showered on the beach, and dried off under the umbrella. She swam for another hour. She likes the water a lot more than I do. After she settled in, I asked if she was hungry

“That was very strange,” she said.

“You mean the man on the beach?”

“That was very sad. I wonder what happened.”

“People mentioned a storm. He had a sailboat”

“Yeah. I could make out a little of what they said. Sailboats are bad in storms.”

“It probably took him by surprise.”

“He must have had a lifeboat,” I said.

“Maybe it was a small sailboat. Too small for a lifeboat.”

“I haven’t seen a small boat since we got here. This is the yacht club set if I ever saw one.”

“Maybe he shouldn’t have gone out in a storm?”

“I saw a reporter talking to some of the people on the beach. We can get a paper tomorrow.”

Later we ate sandwiches at one of the tables in front of the small snack bar, and then went swimming again until the sun started to set and the sky began to change color. The late train back to Florence was crowded, and we got to the apartment after dark. The next morning there was a blurb in the paper. The man had been English, and his wife was in Genoa at their summer home. He disappeared the day before yesterday, the night of the bad storm. His boat was found washed up on shore. It had sunk with the lifeboat still attached. His widow wanted to cremate his body on the public beach, but the authorities said no. They insisted that he be cremated in a licensed crematorium. She planned on throwing his ashes into the sea from the spot where he had washed up on shore.

“We’re going.” She said, not a question.

We took the train back to Viareggio. The weather had turned cool, so the train wasn’t crowded. Heavy clouds and light rain turned the water grey, and hid the mountains. We walked out on the beach. A pale woman in a white wedding gown opened a Grecian brass urn and cast beautiful ashes into the gentle surf. They sat on the surface of the blue-grey water for a moment, and then sunk into the Tyrrhenian Sea. 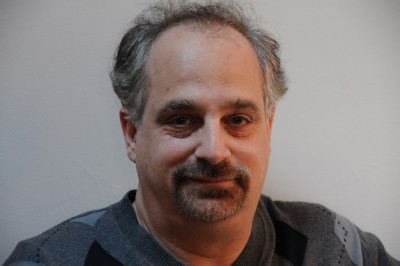 Joseph Zeppetello Lives in the Hudson Valley, and has published short works of fiction in Iron Horse, The Little Magazine, and Copper Nickel. His novel, Daring to Eat a Peach, was published by Atticus Books. He is currently working on another novel, and is interested in writing stories that explore character, and has been experimenting with short works that incorporate a touch of the magical or the absurd.