Texas native, actor Ben Tinsley recently appeared in the film Amaraica: They Lost Our Baby, which is slated for release on HBO in September 2021. The dramatic film takes a fictionalized closer look at the immigration system in America today.

What was it like growing up in Fort Worth when you did?

It was a different, much smaller, area in the 1970s.. But to many Texans at the time, it was still a “big city.” The fat stock show and rodeo were bigger than life. Journalism was still relevant. Disco was cool. The Texas Boys Choir had a huge, tall, sign that you could see from blocks away. Pancho’s All You Can Eat Mexican Food Buffet was still by Westcliff. The Colonial Golf Tournament was in full effect.

What are some of your most fond memories of those days?

Mayfest..and Octoberfest…and the stock show rodeo. Casa Manana being the premiere theater in town…Downtown comvention center programs…”A Place Called Christmas,” where we practiced and performed when I was in the Texas Boys Choir….The Littlest Wiseman, also a TBC-related Christmas annual production at Scott Theatre. And .. my best friend (to this day) Shane Danger and I driving up and down Camp Bowie looking for trouble.

How have things in Fort Worth changed most since then?

Everything. Everything has changed. Merry Go Round Hamburgers on Berry, where I had my first job at age 14? Gone. Sound Warehouse on Berry, where I worked and helped provide security for the rock band Ratt at age 19? Gone. The old Charlie Rose show on KXAS, where I performed with the Texas Boys Choir at age 11? Where we saw George Hamilton (dressed like Dracula to promote Love At First Bite) slide into a limo coming out of Charlie Rose’s studio? GONE. The old Star-Telegram office, where me and my sister hung out at as kids watching our Dad work? Where we also ended up working? GONE.

You grew up with both parents as journalists. What was that like?

I never got away with anything.

What would say is the most important thing you learned from them?

“Listen to your parents.”

Actor Ben Tinsley, right, hit the red carpet in October with colleague Jacky Chao, left, director of the superhero film “Jackman.” The film was viewed at the “Press Play” film festival at the Angelika Theatre in Dallas. Tinsley was cast as “Professor Boa.”

As someone who has worked as a journalist, singer, actor, and dancer do you enjoy any one of those more than the other?

Music and acting are eternal. There is no one good way to approach either. There are many equally brilliant interpretations. These are the mysteries I enjoy chasing the most. As far as journalism? You never stop being a writer and you never stop asking questions.

Do you ever miss doing all of that since you decided to focus on acting and singing.

No. Not even a little bit.

Who were some your earliest influences when it comes to the world of acting?

In addition to being a journalist, my Mom was also an actor at Casa Manana when I was a kid. Additionally, she was a literature professor. So. Mom would read a lot of Shakespeare to my very young sister and I, and show us televised performances of Elizabethan masterpieces such as Hamlet.

I was a big fan of Sir Lawrence Olivier because he CRUSHED IT as Hamlet. I always felt Kenneth Branaugh..was Olivier’s spiritual successor.

When Eddie Murphy hit stardom on Saturday Night Live during the 80s, I became a student of his from afar.Eddie Murphy has this comedic brilliance that has always blown me away. The fact that we were nearly the same age gave me hope I could one day be a performer.

MTV in the 1980s really sparked my creative and dramatic imagination. Both my actor’s mind and my writer’s mind.. There was a lot of interesting things going on in those videos.

My Dad was in a movie titled The 4-D Man. Way back in the day. He was never comfortable talking to me about it. But I tracked down the footage after he died. Pretty awesome stuff, really.

It is important to note that my parents preceded me into both journalism and acting. My mom and I have both created, filmed and published our own documentaries. Our own movies.

Probably my hugest acting influence is Patty McCormick and her husband Dr. Leonard McCormick. I met them in 1986 at Tarrant County Junior.College South Campus when I was still a private in the Texas Army National Guard on the GI Bill.

That was ground zero for my true acting learning. A lot about Stanislavky. And exposure to the acting brilliance of my classmates Sean Matthews, Jim Cain, and Rodney Honeycutt. Among many others. Dennis Cainright. Charley Rubey.

Ben Tinsley, left, is seen here alongside director Mark Rios during a scene from the mob movie “A Family Thing,” now avail on Amazon Prime.

What was it about their work that made you want to do pursue the craft yourself?

It was the magic they all wielded. I wanted it. I wanted nothing more than to be as fearless and powerful as they were and still are.

What was it like to film parts of Amaraica: They Lost Our Baby in the actual law office of Immigration Attorney Francisco Hernandez? Did your relationship with him come in handy when preparing for the role of an attorney yourself?

Apparently, there were some communication wires mixed up in regard to our using the office that day. Not really sure what happened.

But Francisco and I go way… back. Like, to 1985. He’s my brother from another mother. So when he realized I was part of this production, he felt a lot better about letting his office be used.

After that, the scenes were filmed without a hitch. 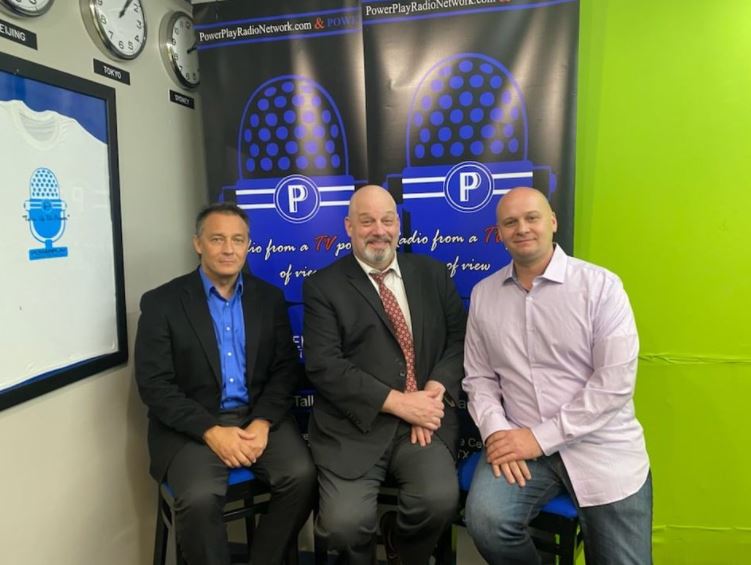 What are your feelings on the current Immigration system in the United States? In what ways would you most like to see it improved?

ICE has become a symbol of terror and fear in the Latin community.

Babies taken away from mothers, involuntary sterilizations. ICE officers posing as cops and deporting all Latin-looking people they can get their hands on — even folks with the legal right to stay here.

ICE should be disbanded and replaced with a less political, less Third Reich-oriented, agency.

And every member of ICE who violated human rights under the Trump administration needs to be prosecuted.

What can our readers expect from the film?

An awesome, sad, and fascinating glimpse at a very real problem through the eyes, or camera lens, of visionary filmmaker Tim Sparks. And some amazing acting from everyone.

Athena Hayes and Ben Tinsley as police homicide detectives in “Never Odd Or Even.” (2019) Filmed in Nacogdoches.

Are you excited about it being picked up by HBO Max? When can we expect to be able to watch it there?

Tim says by September of next year. It has, I believe, already played in the Fort Worth-centric film festival. It won “Best Feature” in the New York Latino Film Festival. All because of Tim.

Do you have any interesting stories from the set you might at liberty to share with our readers?

Francisco was very dismayed to see that my Immigration lawyer character ate so many powdered donuts while sitting at his desk. (laughs)

He’s actually sent out advisories telling friends and colleagues the donuts were not his.

What was it like to be part of a film that was filmed in your hometown?

It was awesome. Texas cities need to provide more tax incentives for movies to be filmed in the Lone Star state. Texas scenery looks so amazing in movies!

What do you hope the viewer takes away from this particular film?

A sense of empathy with this problem and possibly even a feeling of responsibility to help end it.

What projects are you looking forward to working on next?

I’m using the Nic Cage method: As many as possible.

It took me 30 years as a college-degreed news reporter to admit to myself, what I REALLY wanted to do was be a full-time film actor.

So that’s what I became. It’s never too late to change course.