Forty years ago the artistically creative mind of Jim Davis brought the world the ever fun feline Garfield. His comic strips have been delighting readers of all ages ever since. In celebration of forty years of light hearted fun and fantasy we offer up this interview to our readers.

Can you tell us what it was like growing up on the farm in Fairmount, Indiana? What did you enjoy most about your time there? How do you think coming from there has influenced you to be who you are today?

I had a charmed childhood. There was a pond for fishing and swimming, trees to climb, and plenty of cows for tipping. It was hard work too. Mom and Dad raised  milch chows. I started doing regular chores on the farm by the time I was 10. In fact, my brother and I couldn’t wait to be old enough to help Dad in the barn. My dad was a hard worker and he taught me the important life lessons: Work hard, be honest, take care of your family. If Dad said, “Take two or three bales of hay to the barn”, he meant “four”. The manure from the barns was spread on the fields, and, after rotary hoeing, we weeded the corn rows by hand. My dad was  the first  farmer  in the county to get over 100 bushels of corn per acre. Those are the values of the people who live in the Midwest and it makes me very proud to say I am from this area.

Is the farm in your strip influenced by there? I’ve always wondered, when Jon goes back to the farm is he actually going back to Fairmount or is the farm in Garfield located elsewhere?

Yes, I’d say the farm in the comic strip is heavily influenced by where I grew up. As they say, write about what you know.

Your mother played a major role in your becoming the artist you are today. What was she like as a person? Did she ever get angry when you drew on the bottom of the kitchen table or the walls? Are you glad she encouraged you to develop your drawing skills?

Mom was about the sweetest person ever. I loved trying to make her laugh and she was an easy mark. I don’t recall ever getting scolded for drawing under the kitchen table — probably because she didn’t find the drawing until many years later when it was too late to take me to task. I have to give my mom credit for my drawing skills. She was pretty talented herself and having her encourage me and admire my drawings had a huge impact on me. She and Dad were both hard workers. 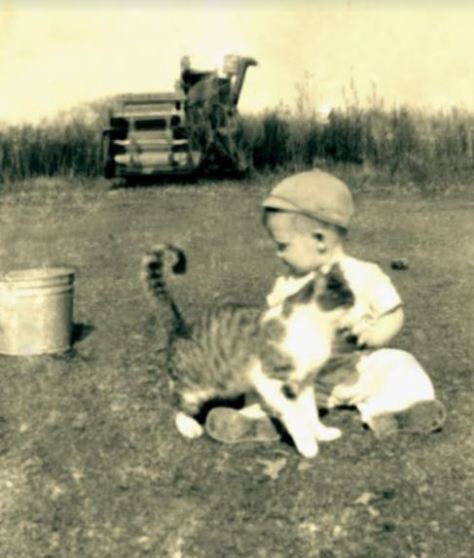 Did you ever have Adeline Nall as your teacher there? What was she like as a person? What do you think was the most important thing she taught you?

Yes, I was fortunate enough to have Adeline as a speech teacher. She was vibrant, flamboyant, and fun!

Growing up were you a fan of James Dean yourself? Why do you think his appeal is so timeless?

In Fairmount, you’re born a James Dean fan. I think it’s imprinted on your DNA. I was just 10 years old when he died so I discovered his films a bit later in life. He was the epitome of the cool and disaffected youth and we love our rebels, don’t we? I think his timeless appeal is in part due to the mystery of James Dean.We were only starting to know him and then he was gone.

Do you ever get back to Fairmount? Do you think it is important that the town try to preserve its rich history?

I get back to Fairmount every now and then — sadly, it’s to visit the funeral home. I guess that’s all part of life. I have so much fondness for Fairmount. It’s an iconic Midwestern town with a fascinating history.

Was the “Cruiser” character on Garfield in Paradise inspired by Dean?

When you first created Garfield did you ever think he would have lasted forty years?

I was just thrilled to get syndicated. I didn’t think about 40 years ahead — or even 25. I just knew I was thrilled to get the comic strip in 41 newspapers when we started and the rest has been gravy.

Why do you think the characters in the strip have been such a comfort to readers of all ages throughout the years?

Everyone can relate to Garfield in some way because most of the humor is about eating or sleeping, something we all do. Also, he is a pet and most people can relate to the pet-owner relationship which makes Jon relatable. And Odie, who hasn’t known an Odie? He is the stereotypical dumb dog — lovable but brainless as a brick.

What do you love most about creating comics ?

I love to make people laugh — or if not that — just to give them a smile. There’s a lot of bad news in the world. I’m proud to be able to lighten things up a bit.

Do you think creativity and imagination are more important than ever in such busy times as today?

Creativity is in part about  problem-solving. And problem-solving is looking for different angles and finding imaginative and inventive ways to address the problem. I don’t know that creativity and imagination are more important today than they were thousands of years ago — you had to be kind of creative to make fire.

What do you do when you need to slow down and unwind?

I love to golf when the Indiana weather allows it. I also enjoy fishing and playing with my grandchildren.

Loving what you do for a living helps.

Do you hope your characters outlive you?

In a word, yes. For as long as Garfield can continue to make people smile, I hope he’ll hang around and that means long after I’m gone.

One thought on “An Interview with Jim Davis”