Debra Christofferson has appeared on shows such as NYPD Blue, The X-Files, Grey’s Anatomy, and American Horror Story to name a few. She is likely best known for her role as Lila on HBO’s hit show Carnivale. She can currently be seen on the Nickelodeon series 100 Things to Do Before High School as well as in the television film, A Deadly Adoption, and will soon appear on the Sundance Channel series Rectify.

As someone who was raised in a small town in the Midwest and had the chance to enjoy life on the farm, how do you think your early beginnings there have influenced you to be who you are today?

Actually, we lived in town; my grandma lived on the family farm and my dad farmed the land and raised cattle until recently. He has worked from dawn till dusk nearly every day of his life, which set the example of good, honest, hard work. When I see my dad’s passion for the land, I see the same passion in myself for acting, and the same work ethic. I give 110 percent to anything I do, and once I set my mind to a task, I work very hard to accomplish it to the best of my abilities.

What was it like to appear on American Horror Story when you did? Why do you think that show has such mass appeal?

American Horror Story was a terrific experience. I was so fortunate to work opposite the extraordinary Jessica Lange and with the wonderful Bryan Rasmussen, who played my husband. The scene that we did was rich with emotion, and to observe Jessica work, and interact with her was a delight. The appeal of the show comes from the fact that people just love to be scared, and the show capitalizes on that. Many of my friends are huge AHS fans, and were thrilled that I was going to be on the show, wildly speculating as to the horrors my character might commit. I rather enjoyed the fact that my storyline was normal, comparatively.

Can you tell us a little about 100 Things To Do Before High School? Is that a role you enjoy?

100 Things is a very well-written half-hour comedy about three middle-school kids checking off their bucket list of things to do before they move on to high school. Everyone is incredibly talented, and we have a blast working together — really and truly, that’s not just “Hollywood-speak.” My character, Lunch Lady Natasha Villavovodovich, is a formidable, dour, no-nonsense Russian with a thick accent, and I adore playing her! When I first auditioned, it was for one episode, but on my second day of shooting the creator of the show, Scott Fellows, pulled me aside to tell me about a scene in an upcoming episode he was writing for my character. Talk about “welcome to the show!” I ended up doing five episodes in Season One, and it looks like the Lunch Lady will be back for Season Two. I can’t wait!

How does it feel to be able to portray a different character with every role? Do you enjoy getting to be such varied types of people?

I love being a character actor; the more varied, the better I like it. I relish the opportunity to bring life to a completely different type of person than I’ve played before. And the highest compliment I can get is that someone didn’t recognize me in the role. Then I’ve really done my job in creating something that is believable enough to have its own existence, apart from me, and yet me.

What about A Deadly Adoption? What was it like to work with the cast in that film?

It was all very “hush, hush” initially, and I had to sign a confidentiality agreement as soon as I was cast, so I wasn’t allowed to talk about it at all until the official publicity came out. Someone actually leaked some info about it before everything was in place, and there were faux denials issued. Will (Ferrell), Kristin (Wiig) and Jessica (Lowndes) were all very personable and a treat to work with. The first scene I shot was with Kristin and Jessica, and we three immediately fell into an easy camaraderie. When Will came on set for the second and third scenes, I half-expected some silliness, but he was the consummate professional. We were on a tight shooting schedule, so there were no high jinx or messing around, we just did our jobs. They couldn’t have been nicer, and even took a few pictures with me, although personal cameras were banned from the set for confidentiality reasons.

Do you prefer working in light hearted roles or the darker ones?

Even though I’m probably best known for dramatic roles, I prefer comedy. It’s so rewarding to make people laugh, to forget their troubles, if only for a short time. I love working with the timing of things, the physicality, and the precise wording and inflection to get the biggest laugh. And, it makes me feel good. However, I also prefer complex characters, and generally the darker the role, the more complex. Truthfully, though, I’m an actor who loves to work. Make me an offer!

Do you ever miss the stage? Any plans to work in theatre in the future?

I do miss being on stage. There’s nothing like a live audience to keep you on your toes, to encourage you, to let you know immediately if you’re not being honest. I had a chance to do a play this summer, but unfortunately my schedule didn’t allow me to do so. Hopefully I’ll get another opportunity soon.

How does it feel to see the film 1915 get such notice? For those who haven’t seen it can you tell us more about it?

I’m extremely pleased that “1915” is doing so well — it’s being seen all over the world. There is so much passion behind it, and everyone worked so very hard to get it out there. 1915 is a psychological thriller about denial — personal denial by each of the characters, and in the bigger picture, the denial of the Armenian Genocide by Turkey. The plot revolves around a theatre director staging a play to commemorate the 100th anniversary of the Genocide, and the cast and crew of the play exorcising their own demons and denial in the process. I play Lillian, an American actress who suffered an onstage breakdown on Broadway as a young star, left the theatre and hasn’t been on stage in years, but comes out of retirement to play an Armenian mother. I know, who’d have believed I’d get cast as that? I shot for three weeks at the Los Angeles Theater in downtown L.A., a beautiful old movie theater that opened in 1931 with the premiere of Chaplin’s City Lights. She was the last opulent movie theater built downtown, and though fallen into some disrepair, is still a magnificent structure. It was an honor to perform on her stage. 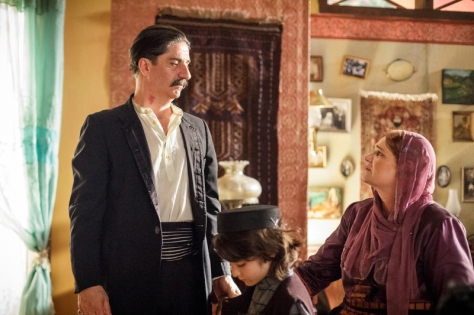 What can you tell us about your upcoming appearance on Rectify?

Ah, yet another confidentiality agreement was signed, so I’m afraid I can’t say much. However, I can tell you that Rectify is a brilliant character study about a man who was wrongly convicted of a tragic crime as a teenager and spent the next 20 years on death row. When new evidence comes to light, he is released and returns to his small home town. The series deals with how his family, friends and the townspeople react and relate to him coming back as a free man. It is fascinating, with exceptional acting and writing, and it was a real privilege to guest star on the show. My episode is currently slated to air August 6th on the Sundance Channel.

What do you like to do in your spare time when you aren’t working? Do you ever do much sword fighting still?

Unfortunately, I haven’t had a good sword fight in a while. Not for lack of trying — people in my neighborhood just don’t have the skills…or the equipment! I spend a lot of time in my garden and yard, some of which I recently tore out to be more water efficient. I’m now finding creative ways to reinvent my English garden to be drought tolerant. I do love a challenge!

Do you think society today places too much emphasis on the superficial and neglects the things that matter most?

Absolutely. Living in Hollywood it’s in your face every day. But tv, film, newspapers, magazines, the internet, Facebook, Twitter, etc. sends that out across the planet daily, too. Part of the problem is that so many people have their noses buried in their phones/iPads/laptops, whatever, that they don’t participate in the world around them. However, using those same devices, especially through social media and the internet, there are individuals and groups that are working on bringing about a shift in that focus, but it will take time and a great deal of effort, and a planet full of people who are actually willing to make that change.

What advice would you offer the women of tomorrow and of today in regards to self image?

There’s a commercial running right now where a woman comments, “2.4 million people in this city and only one me.” I think that says it all. You are unique in the Universe. Only you can give what you have to offer, so be the best you that you can be. Every facet, every strength, every flaw, every bit that is you. Bring it!

More on Debra can also be seen in her previous interview with Van gogh’s Ear at: https://theoriginalvangoghsearanthology.com/2014/11/07/an-interview-with-debra-christofferson/

One thought on “An Interview with Debra Christofferson”