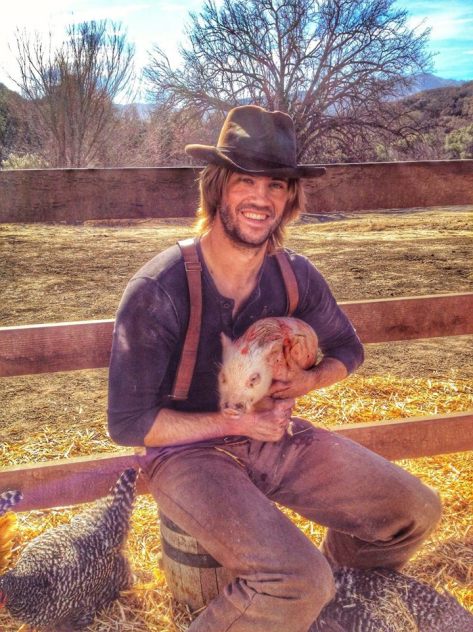 Great Bend local Eli Brocias is best known as the local deputy. A man more complex than society seems to think, he works hard alongside John Henry Hoyle to make sure life is a little more peaceful for the citizens of the small Kansas town. It is our pleasure to offer him a chance to speak his mind in a way that is seldom seen.

What was it like growing up in Great Bend, Kansas? Did you always want to be a lawman?

Well…Growing up here was nice, mostly. Really pleasant. I have a bunch of nice memories from childhood. When I was four I found a frog that I kept inside a wood box until my mother told me she needed the wood box in order to keep the ashes of Uncle Hester, who died of the plague. Still, I had the frog for four days or so and I remember those four days as really nice. I called him ‘jumper’ because he jumped a lot. There was a drought that summer though, so once the box was gone he died I think. Still, he was a nice frog.

Sometimes Ephraim Younger would come by – the Youngers lived down the road a ways – when we were kids. We used to play a game called ‘hit the wasps’ where you took an old broom handle and then tried to hit the wasp’s nest out back as many times as you could. Usually it was once. I guess that I decided to go into being a lawman after my father died. This was just a few weeks before my mother drowned in the bathtub. My dad died losing a duel with himself – or at least that’s what uncle Jesse said –though, actually, I’m not sure how you do that. Uncle Jesse, by the way, died of horse trampling shortly after mother. It’s like Aunt Arvilla said: “Sometimes life gives you oranges and gravy. Sometimes it gives you bedsores.” Of course Aunt Arvilla died of bedsores. She was a terrible cook. Then there were uncle Hebron, Uncle Erwin, Aunt Valentine, Uncle Sorghum, cousin Juniper, cousin Phil, and cousin Alton who passed after a family dispute grew violent. That was a real tragedy. This was all before that big tornado that came through and took cousin Leena, cousin Jefferson, cousin Fontelroy, uncle Jesper, aunt Selena, uncle John, aunt Alice, the deaf boy Stewart, who was visiting at the time, Leroy the mute, aunt Lyla, uncle Jepsom, aunt Forsythe and uncle Tucker. Oh, and all of their children. So at that point I didn’t have any family obligations, and it turned out the Sheriff was hiring. Pretty standard childhood, actually.

How did you come to outlive the first five sheriffs of Great Bend?

I try to stand behind them.

I know you like to pass your time on peyote now and then, what do you enjoy most about that? How else do you like spend your time in such a small town?

Well, Peyote expands your horizons. You learn things. If you want an example of that, I learned not to take Peyote anywhere near a bear because you discover that even though you think the bear is a friend, the bear does not think you are a friend, which explains the scarring on my legs. Sometimes, when I’m off, I’ll try to find games for myself. One game involves seeing how long I can just stand on one foot. Or stare at things without blinking. Or throw rocks at things. Mostly I just get really, really drunk. I may make up other games then, but I tend not to remember them.

What is it like to work with John Henry Hoyle? What would you say is the most important thing you have learned from the whole experience?

It is not every day you see a deputy drag a lady into a gunfight. How did all of that ordeal come about? Did you ever imagine at the time you would become as close to Pearl as you have? What are you personal feelings on her chosen profession?

Yeah. I’d appreciate it if you didn’t actually bring up the gun fight near her. She was just sorta in the bank and it seemed way easier to threaten to shoot her than to actually shoot Frank James. I’d personally prefer if she did pretty much anything else, but she’s sort of insistent. She likes the hours I guess.

How did you come to be somewhat of medicine man when dealing with the evils of the morning after a night filled with alcohol?

Oh there’s a long family tradition of purging the system in times when beset with alcohol’s lingering demons. I’ve only tried the first round of treatments on Hoyle, but I also recommend chewing on an old sock, touching a finger to your eye, and eating sour milk.

How did you feel when you realized you had been duped and paid in confederate currency when Frank James was sprung the county jail? Do you feel Hoyle is responsible for that particular escape?

Well, obviously that was Hoyle’s fault. I think the evidence speaks for itself.

What are some of the most daunting challenges you face as a single man living in the west? Is it hard to find love under such circumstances?

Well there aren’t really any women. Except for whores, obviously. And I don’t really have anything against whores, but they do tend to avoid marrying. And it’s important to settle down. My father always told me, “Son, it’s important to keep the Brocias line going.” This was before that duel with himself. So, yeah, I ordered a woman…Do you think a duel with himself means he shot himself? 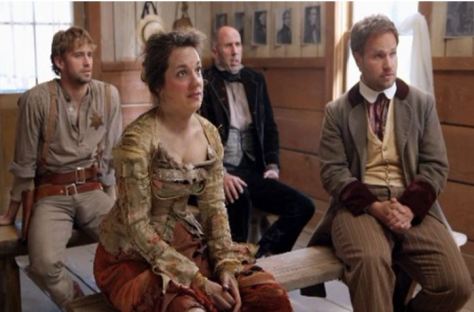 What was it like when your mail order bride showed up murdered by the Benders? Is it true she was in fact a man? How did that whole ordeal affect you personally?

Well, that was the worst moment of my life. It’s not often that you experience a deep and true love such as the one that Carlotta and I shared…Roberta. Roberta. Her name was Roberta. Sorry.

Anyway, we shared something special. And I won’t even address the notion that she was mannish. Her pristine face will live in my memory forever.

Did you feel any guilt about giving those blankets to the Indians when you mistakenly thought them responsible for her death? Did you ever happen to apologize to them doing what you did?

Well, I never actually got the blankets to the Indians. I did my best, but I actually mostly just got the town infected. But yeah, I guess I’m sorry about that. Great Bend lost about thirty people and there are some who would blame me.

How did the town of Great Bend get over the outbreak of Smallpox you inflicted on them? Where any of the citizens of the town angry at you for making them so very sick?

Mostly the relatives of the people who died got mad. And we got over plague the usual way: just getting sick and then dying or, sometimes, surviving.

Did it feel a little…satisfying to get to kick Hoyle around after the argument over your plans to do that?

It’s rare that I really get to punch Hoyle hard. He has the weak skin of an eastern lady and the constitution of an invalid. So, yeah, it felt great to kick the hell out of him. 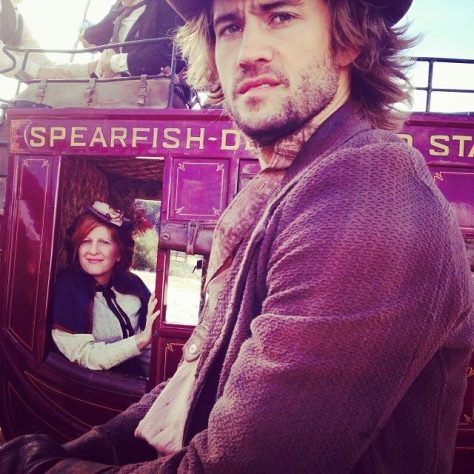 Were you scared when Ma Bender had you tied up and gagged in your underwear? Was that the first time you had ever faced such a terrifying experience?

Well, I was pretty scared when I was younger and Ephraim and I played “Bathtub full of scorpions.” But that was mostly in fun. So, yeah, I guess the Bender’s were worse.

What was it like around town when the Temperance Movement hit Great Bend? Were you glad to see it pass as quickly as it came?

It was really, really dull. I mean dull. Staring at ants dull. Dull like a dull knife. Or a dull scythe. Or some other dull thing. Dull. So yeah. It was good to have it pass.

How is Eli’s Rubberband Emporium(or Rubberbands International)coming along? Why are they so expensive anyhow?

Well, you have to understand that they are bands that are made of rubber. That doesn’t come cheap. Have you ever looked at one? I mean, they are a circle. But it stretches. I don’t know how you might manufacture something like that, but I assume it requires diamonds. Or gold or something. Maybe magic. And, since you are asking, I am willing to offer you four brand new rubber bands at a price of $120. Though there’s a bulk discount if you buy more than a thousand.

What does it take to make a good salesman?

Persistence. And I’m very persistent. I am willing to lower that previously quoted price to $100 to get you to walk out with some new rubber bands today… Once I almost beat a snake in a staring contest. But it turned out it was a dead snake so it actually won out eventually. 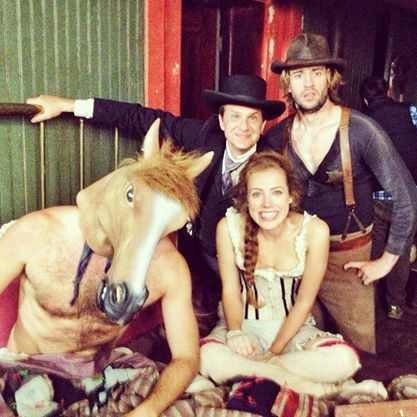 It seems like you are always looking for something to do other than your deputy work. What would you most like to do when you are finally able to leave law enforcement? Or have your recent experiences there helped you develop more of a taste for that line of work?

Well, I’d prefer to do something that’s less bullet heavy. And maybe something that plays to my natural talents. I’m really good at eating things. And I have a good solid recipe for rattlesnake pancakes, so maybe I could cook?

What did you enjoy most during your brief stay in Nicodemus? Was nice to get a break from Great Bend?

Nicodemus is really nice. But it would be uncouth to mention what it was that I enjoyed most about my stay.

You have also been to Dodge City. What would you say was the most amazing thing you saw in your travels there?

Well, they have streets paved with street. Buildings made of stone. A place where you can pay a dime and see an elephapotomus…That’s an elephant mixed with a hippopotamus. Of course, it wasn’t so much the creature as a picture of one. And it was dark. And the picture was blurry. But I think it was worth it.

Ephraim ever forgive you for what went on during the raid on Cole Younger?

Ephraim and I are on the outs for a while. But we’ve been on the outs before. Sometimes we’ll get mad at one another because one of us dresses like a lady, or gets stung a whole lot by wasps or scorpions. But at the end of the day we usually make up. We see the world similarly. That means a lot. 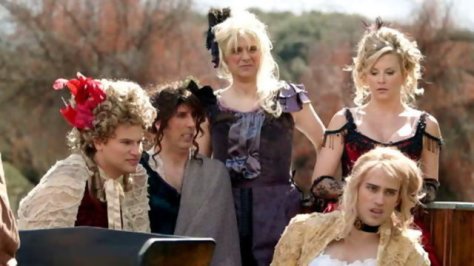 Where do you see yourself years from now when you are old and grey?

Well, the Brocias family doesn’t really have a tradition of living that long. So I don’t usually picture myself that way. I tend to imagine a young, violent death, possibly by tornado, through guns, and snakes are also likely. Or knives. Or plague. Or syphilis.

Is there anything you’d like to add before you go?

Yeah, well, I am willing to pass along the recipe for Eli’s famous pancakes:

As many rubber bands as you can afford.  Directions: Club snake to make sure it is dead. If snake is not dead, wait for snake to die. When snake has died, mix with other ingredients. Fry. Add molasses to taste. Keep rubber bands for display and other purposes. 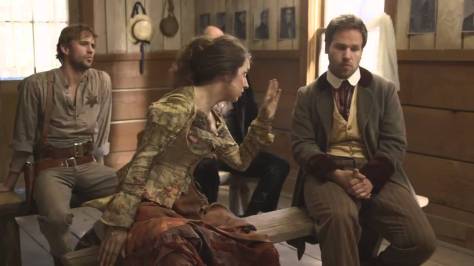 One thought on “An Interview with Eli Brocias”