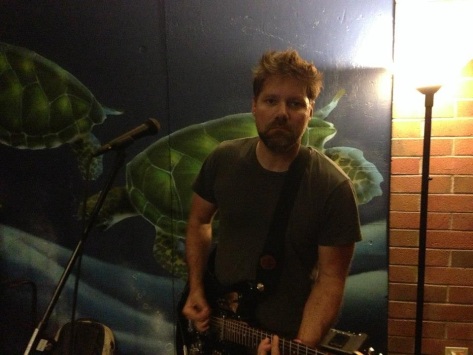 While Sean Spillane may be best known for his stint in the critically acclaimed band Arlo, he has been continuously representing indie music at it’s best, providing tracks for some of the most interesting soundtracks out there. From Jack Ketchum and Lucky McKee’s The Woman, Brian Keene’s Ghoul, and Chad Crawford Kinkle’s Jug Face he has made memorable songs that cross various genres.

What have you been up to since we spoke last?

Hmmm… Well, I’ve been writing and recording a lot of music for one thing. I’ve also been working on becoming a better engineer in order to mix and master my own music in order to speed up the process of getting my stuff out to the masses. The Jug Face Soundtrack was an all consuming part of my life for a couple months while I mixed and mastered it.

Aside from that, I’m currently rehearsing with a former band I played guitar in called “Midway”. We’re playing a reunion show to help promote the release of a documentary about the LA music scene we used to be a part of called “Kiss or Kill”. The documentary is titled In Heaven There Is No Beer. That show is Aug. 8 at the Satellite in Los Angeles, CA for anyone who wants to come. Then I’ll be playing a solo acoustic/electric show of my new stuff and some songs from The Woman and Jug Face on the afternoon of Aug. 24 at the Thirsty Crow which is also in Los Angeles. Show starts at 2pm.

What was it like to work on Jug Face? Are you excited to see the soundtrack’s release? Do you ever get nervous about how your work will be received by the public?

Jug Face was incredibly fun to work on, because I loved the script and actually heard ideas for the music while I was reading it. Chad Crawford Kinkle wrote it and when I met him up at Sundance, I cornered him and gushed about the script and promised to send him some music ideas I had when I got back to LA. I’ve always enjoyed music with an Americana/bluegrass/country sound, but other than Complicated Woman from The Woman soundtrack, I hadn’t had the chance to really dig in and write with that sound in mind. Anyway, Chad liked what I sent him and we went about exploring ideas for a unique sound for this unique story.

I’m very excited about this release because it really is extremely different than anything I’ve released before. The score was more prominent, than the songs in Jug Face. Basically, I used the songs in the background to add to the reality that we were somewhere in the US where folks say “Howdy!” more than they say “Hi!”. As for the score, I wanted it to exist, but never really draw attention, or rather I wanted the viewer to feel it more than hear it.

How did this one differ most from your previous works?

My approach to it was different in that I wanted to have a specific sound that lived in every part of the score. That sound turned out to be an old electric guitar I have tuned to a 5 string open G minor tuning. The 5 string idea came from reading Keith Richards’s autobiography. Then I gave it this distant, distressed and foreboding sound using reverb and distortion. Once I had that, I just seemed to fit what was onscreen most of the time. Another thing I did was to write specific themes that went with specific main characters and recurred in slightly different arrangements throughout the film.

You have often worked with Moderncine Studio Films. What do you love most about working with them?

Andrew van den Houten is Moderncine and I can honestly say that he is one of my favorite people on the planet. He hires you to work on his films and then lets you do your thing, all the time encouraging you with positive energy and enthusiasm. It’s totally infectious. Then after you’re done, he champions the project with every ounce of his being. He has become a close friend and confidant and no matter where our careers lead, I’m sure we’ll still crack each other up over transcontinental phone calls and give each other encouragement and advice when needed. Not only that, but I’ve made many other close friends by working on Moderncine films, like Andrew Smetek (Sound Designer) and Zach Passero (Editor). Plus there’s Krista, Polly, Alexa, Bob, Jackie, Chelsea, Lucky, Heinrich, Alex, and many more. Great guy, great company!

How do you decide which songs work best with which film or scene?

I’m just running on instinct when it comes to what I try, and then it’s up to the images on the screen and the dialogue to accept it. Other than that, it’s a form of wizardry that I’m still discovering the more I do it.

Where do you draw your inspiration from?

I mostly draw inspiration from my experiences or those of people close to me. Then there’s some research that goes into the approach of each project. It seems, so far, that there are a series of eureka moments when I think of a melody or sound that will fit well with a scene or a character. It’ll just feel right, but I often have to go down some dead ends to get there. The key is to not get discouraged.

Is there any one soundtrack so far that you love more than others or do you love them all equally?

I love them all equally, but I feel like my best is still to come.

Only if I was guaranteed to make a ton of money. I have too much fun writing and recording. Plus, it’s much healthier not to tour. Then again, maybe if I got to tour all of Europe or Australia. I’ve done the USA and it was fun but hard. I’d tour Japan again, for sure.

Are there any little things about you that you’d not mind sharing with our readers ? Any quirks to speak of?

I’ve always wanted to be Spiderman.

What do you love most about making music?

Striving to attain perfection (which is impossible) and instead coming up with something better…imperfection.

What was it like to take up music at the age of 5? Do you think it fair to say your early introduction to it awoke your passion to create?

When you’re 5, like everything, your learning curve is so fast. Playing an instrument becomes second nature very quickly. I’d have to say that playing violin at a young age heavily contributed to being creative musically later on. It’s not such a mystery and you know that it’s possible to at least try come up with your own stuff.

What advice would you offer the musicians of tomorrow?

Be yourself, try to do something new and don’t be afraid to fail over and over again. Realize that finding yourself creatively is something that takes time and hard work. If fame is what you want, be an actor.

Do you have a dream project you’d most like to accomplish before you die? Musically and otherwise?

I have to say that every project is a dream project. Each time I sit down to write, in the back of my mind I’m thinking that this could be the best thing I’ve ever done, no matter what it becomes in the end.

What do you think is the most important thing one can learn from this thing called life?

What projects are you looking forward to bringing the world next?

I’m still working on a crowd-funded documentary called I Want To Be An Astronaut which is about NASA, the space program and most importantly a young man’s journey to realize his dream of becoming an astronaut.

I’m going to release an EP of songs that I’ve recorded between film projects in September.

Thanks for listening and check out Jug Face in theaters Aug. 9, and watch it now on iTunes. The Jug Face soundtrack comes out Aug. 6 on iTunes!