At twelve, I played Mary

in a community Christmas pageant.

I saw you at the service, people said.

I saw you with your baby,

riding your donkey. A real donkey,

led by some boy. Older boy.

Fourteen at least. I don’t remember

his name or if I even knew it

at the time. Just that I couldn’t look at him.

Couldn’t look straight at him without

blushing and lowering my eyes.

Everyone said I made a great Mary.

That I did a great job being

the one God descended upon. No,

not descended upon. Entered.

That I did a great job being the one

God entered. And who

The boy is important, the visiting poet said.

Immensely important. The center of the poem,

he said. Her desire for him is the center of the poem,

the dramatic center. Her desire for him is

what this poem is about. This much is clear: She desires him.

The girl riding a donkey desires him,

the boy, the dramatic center. You need to build him up more,

he continued. Give him a name, good looks, maybe a touch of acne.

Help us to see him, to see the real center of this poem.

To see into the center; to see inside her

desire. Help us to get inside –

inside the blushing and the lowering.

Tell us how blue his eyes are, how dark his hair,

how straight and perfect his

nose. We need to see him. The center of her desire.

Unless, of course, you are striving

like you would if you were talking about, say, God.

Unless, of course, you want the boy to be mysterious

in the same way a deity is. Maybe even the girl.

He said this last part parenthetically. (Really, he did.)

Unless of course you, you, just don’t get it.

That there is nothing mysterious here. Nothing of the

element of religious deity in the story of

a god who descended upon, entered, a woman, a girl,

and with this, the world. Entered and created a world filled

who would grow up to be immensely important men,

who would grow up to be the dramatic center of every girl’s life,

grow up to be the desire of every girl who would become every woman,

who would become, be becoming to, every man,

who would become, yes, become, come, come not out of choice,

not out of desire, but fear. Fear and trembling.

Unless, of course, you call that love. 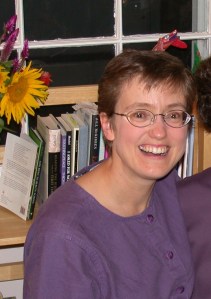 Lisa Dordal holds a Master of Divinity and a Master of Fine Arts in poetry, both from Vanderbilt University, and currently teaches part-time in the English Department at Vanderbilt. Dordal’s poetry has appeared in a variety of journals and anthologies, and her chapbook, Commemoration, is currently available from Finishing Line Press. She lives in Nashville, Tennessee with her partner, Laurie. For more information, please visit her website at http://lisadordal.com.