Stopover in Rome on the way to Buenos Aires

Today Rome, proud and ugly and vulgar Minerva,
first feminist woman of power, upon her back I step
Rome was some scenery
made of grub and robbery

my father had been a Roman arena-master once when he had mobster balls
and paid no bills, a prince wearing ivory keys from pianoforte with force
but Rome was some scenery
and I was an Arab Israelite, I was a son stolen by Lot’s wife
a son of hitchhiker Hajar a son who looked back.
Rome under my foot soles, two crying-child feet
bent and crumpled into the shape of beans, 18 hours

Rome was some scenery
its ancient temples where augurs stood
reading the fates and gourd like St Helen of Troy
in the intestines of the birds, origin of
seeing the future in starch-foods, practiced
by cabals of old bald women, jazz musicians and pimps
cleaned off ancient bridges and streets

Rome was some scenery and
I need to pull birds finally down from
grapefruit trees,
rooftops, from hands of children
and off the heads of old fools and madwomen
who want to tell me their failures provided wisdom
and advise me on politics, life, economy of prose and wine-wet crumbs
and I need to crack open the bodies of the birds
before the police arrest me, rushing over the body of beggars
to arrest me.

shoe-crushing over the peanuts in the bellies of the beggars and hobos
to stop my hands of cruelty and oppressive love
I split apart a bird-husk NOT as a child splits radios to seek
the origin of song of songs for I know it is neither in organs nor
to be found in deadness,
I crack its hyperbole-electric song-husk apart, as the tourists eat at terrace,
to force myself to look to the future

my mother was the idiot, the nameless wife of Lot,
weak woman who fed me her salt of regret
and of looking back

from her breast marked with a golden David Star
my father did not know he the groom was supposed to
break this jewel hex-star of girl on their wedding night,
a non-jew, a half-Indian bumpkin dressed in a cosmopolite suit
Paraguayan bumpkin didn’t know what a man does with a woman until
he saw forbidden movies in the 1970s Buenos Aires underground cinema

I must rip the doves from the hands of Italian nuns
who stoop to horn-faced still-extant lepers and beggars
proud race that survived the teeth of progress and Western medicine
on the bridge of trastevere, and tear open birds
to open up my eyes to Lucia future,
for I had too many regrets already at ages 11, 12 and 15

as parents snored heavy with whiskey in the airco dark, with la-vida-es-un-sueno-y-los-suenos-suenos-son
the red electricity-genie of alcoholism, playmate, only friend at night lighting up my room with stories
jumped in through window with verse and gifts smuggled on crying 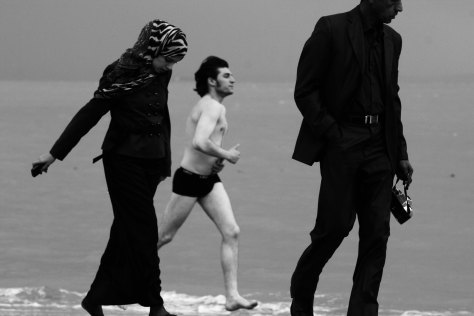 Arturo Desimone was born (1984) and raised on Aruba, to parents of immigrant origins foreign to the island. He emigrated to the Netherlands at the age of 19, and decided to leave Amsterdam after some years. Since then he has lived on the road, between Poland, (post)revolutionary Tunisia, and Greece, an arrangement better enabling writing and drawing. At the moment he is based in Buenos Aires, Argentina, his grandparents’ hometown. His poems and stories have been in Horror Sleaze Trash, Unlikely Stories, at the blog A Tunisian Girl and are forthcoming in Hinchas de Poesia. His drawings have been exhibited in Krakow, Paris, Trinidad and Tobago Erotic Art-week and Amsterdam and on the cover of the Journal of Deleuze Studies.