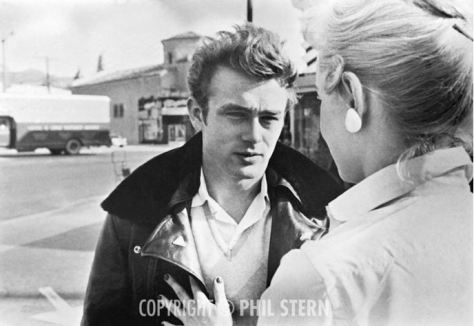 Toni Lee Scott has long been known for her iconic jazz vocals, her deeply admirable determination to make the best of this thing called life, and her friendship with the gone too soon James Dean. Her range has won her long standing recognition and praise in the cabaret genre. Over the course of her career she has appeared on such television shows as Steve Allen, Johnny Carson, Tennessee Ernie Ford, and The Mike Douglas Show, just to name a few. Her life story can be found in the autobiography A Kind of Loving. She is currently working on a documentary covering her life as well.

What was he like as a person? Do you think society tends to overlook the individual in favor of the fame aspect of his persona.

He was very sweet. With his new found stardom he experienced people using him and friends betraying him. There were very few people he could trust but he stayed true to himself. He was always that very sweet person that I came to be friends with. He never had a bad thing to say about others or what was happening with his new position as a star. He was just a very sweet, well raised boy from Indiana.

I think society adores him which is why so many people travel to Fairmount Indiana to see where he grew up and to get to know him on a much more personal basis. It is so very beautiful to see people leaving gifts for him and kissing his tombstone.

He protected me and looked out for me. He was always there with a smile and a warm gesture.

Do you remember where you were when you first learned of his passing?

Yes, I remember. I was at home on Doheny in West Hollywood when the phone rang. It was Sidney Skolsky’s daughter. She informed me of his passing. I couldn’t believe it. I even cried “I don’t believe it” but she assured me that it was true. It was so heartbreaking. I do miss him a great deal. He was only 24. He was so young. He had so much life to live. I informed Dennis Hopper about Jimmy and Dennis got very upset. It affected him for a long time. We were both heartbroken. We both had lost someone that we cared about very much.

What memories of him stand out most in your mind after all these years?

For some strange reason he would sit next to me at the counter in Googie’s coffee shop. It is strange but I would never look at him. He would simply ask me to “pass the sugar” and I would while still reading my paper. That went on for maybe two weeks until we left at the same time. He got on his motorcycle and I informed him that I had lost my leg on a motorcycle just like his. He said, “Yeah I know.” Then he started the bike and went down the street. I found that very interesting that he knew about my accident.

I remember how he convinced me to get on the back of his motorcycle. He said, “It’s just like falling off a horse. You got to get back on.” I didn’t want him to think I was chicken so I got on the back of the bike. It was very difficult for me. The only other time I had ever been on a motorcycle was when I had my accident so as you can image it wasn’t easy for me. As soon as we started going down the street I started screaming. He brought the bike to a stop and Dennis Hopper came running down the hill with my crutches and I walked back up. Even though that scared me…I think Jimmy wanted to show me that I could do it. I believe he wanted to show me that I had the strength inside myself to do anything I put my mind to. He had such faith in me and for that I am forever grateful.

Is there anything about him you think his fans would be surprised to learn?

He was only in my life for 18 months but he has been here leaving me bread crumbs and magic for almost 61 years…all along the way and for people that I touch. He would talk a lot about his family and his work as an actor. He took his work very seriously.

Did he ever mention Mildred and how he dealt with such a horrific loss at such a young age?

No, he didn’t really mention his mother. I guess that was something very close to his heart and very private for him.

What would you say is the most important thing you learned from him?

After his death you went on to form M.A.R.G.I.E. to help the young to deal with the loss of a limb. Why do you think such things are important? What did you learn from working on that project?

I named the M.A.R.G.I.E. foundation after a 15 year old girl by the name of Margie Chapin. I created the foundation to help others with disabilities and to help them to obtain properly made and properly fitted prosthetic limbs. Also I wanted to help them to obtain the courage and the confidence to re-enter society and the work place. I myself found that from my own experiences doing so was very difficult so I wanted to make it easier for others.

What a lucky girl I am…I had the pleasure of his company…and his friendship.

Many thanks to Cody Mullins for taking the time to take down the answers to my questions.

5 thoughts on “An Interview with Toni Lee Scott”